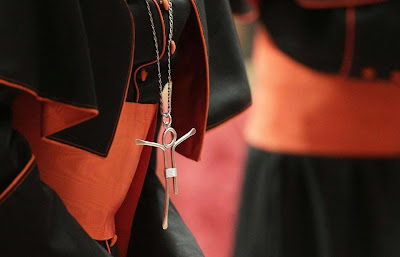 U.S. Cardinal Theodore Edgar McCarrick's cross is seen as he attends a prayer at Saint Peter's Basilica in the Vatican March 6, 2013. Catholic cardinals said on Tuesday they wanted time to get to know each other before choosing the next pope and meanwhile would seek more information on a secret report on alleged corruption in the Vatican. REUTERS/Max Rossi

I thank the Lord he is too old to vote.

I can still remember how he literally salivated on screen over the prospect of JPII expiring at any moment. If these apostate frauds are so unhappy with JPII and BVI who are their own kind, good Lord what kind of person would they thrust on us for a pope? I can't let myself even think about it. Saint Alphonsus Liguori, PRAY FOR US!!!

This type of cross comes from SE Asia. The missing piece of leg represents the closeness of Christ to those who have lost a limb due to the many landmines in certain parts of that continent. I understand that this particular pectoral cross was given to the cardinal by the family of young boy who suffered in such a way.

Whilst wearing it outside of the context of SE Asia may be unwise (due to the understandable ignorance of others) it does not call for comments lacking in Christian charity. Such an attitude is not of God; and if it is not of God there is but one other source.

My friend, I hardly think it likely that those who are ignorant of the true symbolism of this cross are doing the work of the devil. If McCarrick believes this is the type of cross appropriate for a man of his dignity to wear, well and good. The fact is that it is aesthetically un-edifying to me (and, obviously, to others), and that is a fact of life which we, I believe, are at liberty to point out.

I thank you for informing us what the true meaning is, and I certainly sympathize with the many innocent people being blown up by land mines in SE Asia, a true horror in my view. But try to be understanding of the fact that people with long memories are aware of what kind of man McCarrick is, and based on that knowledge it is understandable to question the Cardinal's motives.

I get it, include a piece of crappy art in a religious context but make it about children, or injured and maimed children, to put it above the criticism it so richly deserves.

When I first saw it I thought it was some kind of reference to sexually abuse of children. I'm really not relieved to find it's not.

You can not improve on the meaning of Christ on the traditional cross, He already represents those who have lost limbs in SE Asia, maybe the good Cardinal should wear a chain with 30 or 40 different crosses representing all of those good causes found in this world, of maybe wear the Cross of Christ crucified we all venerate?

parepidemos, Remember Christ's words on the cross? Father forgive them.... You are absolutely right. There are many who align themselves with Catholicism but will take any opportunity to cause disharmony and sneer at others.

We must pray for them. And those who gloat on any other blog, or write it come to that.

And then there’s false charity, probably one of the worst forms of spiritual pride.

Does anyone know who is the artist of McCarrick’s pectoral cross?

With all due respect, their are several interpretations of his cross. Also, this is symbolized in Freemasonry, long an issue within the Holy Church.

There are other meanings. Would need additional specifics for this landmine explanation. Really think this is incorrect.

Continue your research. Your instincts are sound. This is also symbolic in Freemasonry. A Freeman cannot partake of communion either.

That would be insightful. Thanks for asking.