Edit: why isn’t he on a plane back to California and Folsom Prison? Some may have noted that Pope Francis publicly stripped Cardinal Law of his office. Hopefully, he applies discipline equally, for Cardinal Mahony cost the Catholic Church in the United States, just in terms of capital, far more than Cardinal Law by about 150 million Dollars.

There is not much of an outcry for the fifth estate to put this man away either. 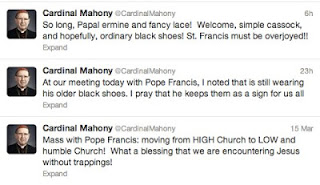 Of course, who does CNN go to to get expert clarification? National Catholic Reporter. H/t: Alison
Posted by Tancred at 8:52 AM

I don't think Pope Francis will exile Mahony, especially after then-Cardinal Bergoglio thanked Mahony for extensively addressing "sexual issues with clergy" during the General Congregations. Seen in this interview with KABC-TV in Los Angeles: http://abclocal.go.com/kabc/video?id=9028355

We must never forget that this Judas publicly accused Bp. Williamson as being a non-Catholic who could never be Catholic.

Also, St. John 12:3-6:
3. Mary therefore took a pound of ointment of right spikenard, of great price, and anointed the feet of Jesus, and wiped his feet with her hair; and the house was filled with the odour of the ointment.
4 Then one of his disciples, Judas Iscariot, he that was about to betray him, said:
5 Why was not this ointment sold for three hundred pence, and given to the poor?
6 Now he said this, not because he cared for the poor; but because he was a thief, and having the purse, carried the things that were put therein.

Please, chuck this guy into the dungeon with Cd. Law.

So Cardinal Law, who was already punished once, is publicly shamed, and nothing happens to the even worse Cardinal Mahony? Do we even know the pope's reasons for removing Law? For all we know, he might have been punished for wearing lace, which is apparently now verboten.

BTW, I see Hans Kung is also "delighted" by the election of Bergoglio.

I notice that you include only 3 of the recent comments by Cardinal Mahoney. Perhaps if you take the time to read some others you will see that he is not disparging Benedict XVI; indeed, it appears that he has great respect for our beloved Benedict.

I am no fan of Cardinal Mahoney, nor of Cardinal Law, as both have reason to be very ashamed, but let us never twist posts to suit our own leanings.

I think the point that was being made was that Mahony is showing what kind of low-class Catholicism he prefers over the somewhat more reverential style of Benedict. And the tweets expres perfectly Mahony's bargain-basement Catholicism.

Whether or not he respects Benedict is irrelevant to the discussion.

There is simply no other way to read these tweets as anything BUT disparaging of Benedict XVI. He's just deft enough not to name his target by name. But who else wore ermine and red shoes? These comments are as much praise for the new incumbent as they are backhanded insults of his predecessor.

I won't do him the honor of visiting his facebook or twitter pages, but I am told that in some of his other comments, the Cardinal has also disclosed how he voted in the conclave (for Bergoglio on all five ballots), which is, as I understand it, a breach of the solemn oaths, incurring automatic excommunication, latae sententiae.

I am somewhat confused the so called liberals named above like Mahoney and yet I just read where Cardinal Marc Quellet, who came in third was also pleased with Pope Francis and says he will be good for the Church and is what the Church needs at this time after Benedict. He also said he had a long talk with the new Pope afterwards and was very pleased. Would he be pleased if the new man elected would take the Church in a way different from the Pope Emeritus? I myself thought he would be elected and take the name Pope Benedict XVII.

Schmenz, Parepidemos:
He is a Cardinal of the RCC church pitting one pope against another at the very moment of one's succession from the very much alive other. It does not get more amateurish, tacky, malevolent, imprudent and smarmy than this. The man has absolutely no class nor real sense of what it is to be a prelate in an institution that is all about self control and restraint. Unheard of in the modern age. Not to mention his disclosing information about the curia's voting. And all at a time when really, nobody wants to hear from him at all.