The Feast of St. Peter Damian: A Window to the Past 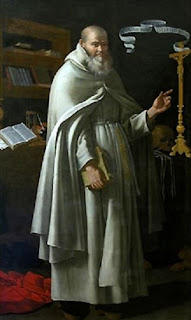 Edit: today is the feast of St. Peter Damian, the great reformer who authored the book "Liber Gomorrhianus” and presided in his office during a time of great reforms as well as tribulations.  Along with the Feast of the Chair of St. Peter, it provides a a parallel, a back drop and historical prospective in the face of current events which all too many feel are unprecedented, if not apocalyptic.

During St. Peter Damian’s time, Benedict IX resigned his office to St. Peter's friend, the brilliant John Gratian.  After abdicating in penitence, the very troublesome and corrupt Benedict IX entered the seclusion of the monastery of Grottaferrata.  Here’s an excerpt from Catholic Encyclopedia:


Although living in the seclusion of the cloister, Peter Damian watched closely the fortunes of the Church, and like his friend Hildebrand, the futureGregory VII, he strove for her purification in those deplorable times. In 1045 when Benedict IX resigned the supreme pontificate into the hands of the archpriest John Gratian (Gregory VI), Peter hailed the change with joy and wrote to the pope, urging him to deal with the scandals of thechurch in Italy, especially with the evil bishops of Pesaro, of Città di Castello, and of Fano (see BENEDICT IX; GREGORY VI.) He was present inRome when Clement II crowned Henry III and his wife Agnes, and he also attended a synod held at the Lateran in the first days of 1047, in whichdecrees were passed against simony. After this he returned to his hermitage (see CLEMENT II; DAMASUS II). Pope St. Leo IX was solemnlyenthroned at Rome, 12 Feb., 1049, to succeed Damasus II, and about two years later Peter published his terrible treatise on the vices of theclergy, the "Liber Gomorrhianus", dedicating it to the pope. It caused a great stir and aroused not a little enmity against its author. Even thepope, who had at first praised the work, was persuaded that it was exaggerated and his coldness drew from Damian a vigorous letter of protest. Meanwhile the question arose as to the validity of the ordinations of simoniacal clerics. the prior of Fonte-Avellana was appealed to an wrote (about 1053) a treatise, the "Liber Gratissimus", in favour of their validity, a work which, though much combatted at the time, was potent in deciding the question in their favour before the end of the twelfth century. In June, 1055, during the pontificate of Victor II, Damian attended asynod held at Florence, where simony and clerical incontinence were once more condemned. About two years later he fell ill at Fonte-Avellanaand nearly died, but suddenly, after seven weeks of pain, recovered, as he believed, through a miracle.

It’s interesting to note that Moynihan doesn’t seem to think that any documents could have found their way into unfriendly hands by way of Paolo Gabrielle.

It’s also interesting to note that he identified the La Repubblica journalist as having Communist connections.
Posted by Tancred at 9:25 PM

As I remember from reading about this Saint, the priest-offenders were given the choice of ending their days in prayer under lock and key or they had their days ended for them.