Syria: Christian Dragged From Bus and Shot, Because he Wore a Cross 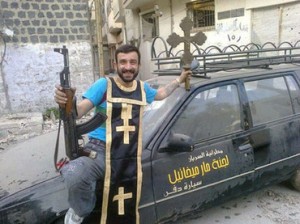 (Damascus) A Syrian Christian of the Armenian Church was put to death by Islamists on the road to Aleppo. As the news agency Fides reported while Christians were traveling on a bus towards Aleppo,  the bus was stopped by armed Islamists, who had set up a roadblock. The Islamists were scanning the bus, to relieve the passengers relieved  of possessions and looking for potential victims of kidnappings for ransom.  On the 9th of February two priests were  kidnapped in this way. The Armenian Catholic priest Michel Kayyal and the Greek Orthodox priest Maher Mahfouz. Both are still in the hands of Islamist gangs.
As the Islamists in the bus investigated the travelers, they also encountered a Syrian Christians Yohannes an  Armenian, who wore a cross on a necklace. They dragged him out of the bus and shot him at close range. For safety reasons,  as Fides reports, they omitted the messenger service on the publication of his full name in order to protect the family of the victim. As the Armenian Church announced, he is a "martyr", because the Christian was killed in "odium fidei", out of hatred for the Christian faith.
Just recently, a group of Christians to reach Beirut to escape the perilous situation in Syria. Their bus was hit by a rocket in flight. Two Christians, Boutros and his 22 year old fiancée Naraya, who wanted to get married soon, were killed. Islamists then stole everything they could steal in this bus brutally brought to a halt.
The Christian churches in Syria have decided not to pay a ransom for kidnapped Christians. A decision that was made after much consideration, as Fides reported, because Christians do not want to be prisoners of a lucrative Islamist kidnapping industry. If they were to pay, it would just such but inflame.
Instead, call the churches to the international community to take action against the inhumane practice of kidnapping in Syria. The Christians of Syria urge all Christians to support through prayer and spiritual sacrifices. Fides reported that the church tours in Syria, it is agreed that the rescue of the hostages, including the two priests, is to lead a spiritual battle and not as fundraising to collect money  for ransom payments.
Text: Giuseppe Nardi
Image: Faith

Link to katholisches...
Posted by Tancred at 3:27 AM

Another example of American tax dollars at work.

Whatever his faults, Assad left the Christians alone and defended them when necessary. Now, with the US/Israeli drive to oust him and replace him with a more pro-Israeli stooge, the Syrian "rebels", armed, financed, trained and encouraged by the US, will commit more of these atrocities against Christians. An exact replay of Iraq.

Sometimes it disgusts me to think I am an American.

Thanks George and Barack.

My countrymen as well as my churchmen have disgusted me too but I will never ever be ashamed to be an American or a Catholic because my relationship is to the GOOD in America and what is the TRUTH in The Church, not to the evildoers who have sullied them both.

What you say about Assad is true. My Catholic family came from Syria. But please, Aged Parent, do not let your disgust turn your heart in the wrong direction. Stay on mission.

Just doing the family business since 622ad - robbery, kidnapping and murder. Crusade anyone?

to The Eponymous Flower: I very much appreciate the purpose of this Site. So,Thanks.