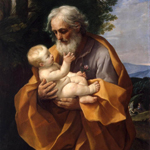 Through these considerations, the poor and those who live by the labour of their hands should be of good heart and learn to be just. If they win the right of emerging from poverty and obtaining a better rank by lawful means, reason and justice uphold them in changing the order established, in the first instance, for them by the Providence of God. But recourse to force and struggles by seditious paths to obtain such ends are madnesses which only aggravate the evil which they aim to suppress. Let the poor, then, if they would be wise, trust not to the promises of seditious men, but rather to the example and patronage of the Blessed Joseph, and to the maternal charity of the Church, which each day takes an increasing compassion on their lot.
Posted by Tancred at 11:14 PM

Let us all pray for the intercession of St. Joseph for the Holy Catholic Church. The days are growing darker and Satan's influence is becoming more prevalent in this faithless and perverse world. Sancte Ioseph, ora pro nobis. +JMJ+

The timing of this consecration could not have been better. So also that they have proclaimed this to be the Year of Archbishop Lefebvre. The more I learn of this holy bishop the more I see saintliness like that of those I read about as a child. A holy man, fruit of a holy and pious Catholic family. A true Prince of the Church and surely a saint. One whose life can stand up against all scrutiny. Unlike those promoted by the Modernists. Bah!

My household will be joining the SSPX in this consecration.