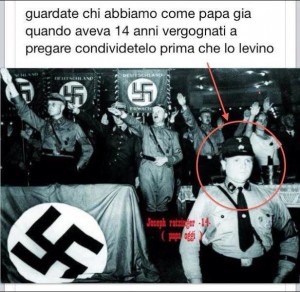 Well...it must be happening for sheer hate's sake since the Catholic Church no longer acts or speaks like the Catholic Church, thereby giving the world's whackjob anti-Catholics a reason to be so hostile. Most of the heirarchy have mindsets and hearts more akin to these media liars...so what's to hate? Except to hate...for hate's sake. No?

That 'Nazi salute' pic is the dumbest thing I've seen for awhile. He wasn't even ordained until after the war!

Or like the anti-Catholic morons who think the pope is the antichrist because of the upside down cross on the seat in the photo with JPII. How stupid can you be? Don't they know anything about the death of Peter???

The dumbest Protestant claim (not including Jack Chick) I've heard heard was that we believe the Pope is immortal. Why? Because their brilliant researchers turned up an encyclical with the phrase 'my predecessor of immortal memory.'

All that tells me is that they spend waaay too much time researching the pope in order to find fault. Don't they know that they are to PRAY for their "enemies"?!

A letter was once put in my post my mistake. From some Protestant Freemason organization. The outside of it just went on an on about how evil Mother Teresa is because she tells her suffering "poorest of the poor" in India to embrace their sufferings and offer them up. What idiots! These graceless, stupid idiots claim to be "Christian" yet do not even know the basic tenets of the Christian faith!

"If any man will come after me, let him deny himself, and take up his cross, and follow me."
"That our hope for you may be steadfast: knowing that as you are partakers of the sufferings, so shall you be also of the consolation."

They REFUSE the cross and prefer to pile what they owe for their sins high on the shoulders of Jesus! What worthless oxygen thieves! And they actually believe that they will be rewarded for their cowardice and sloth! And just what reward will they receive for the evils they do and the LIES they hurl against His holy Mother?! They think they will be warmly received by The Trinity???!!!!

"Bless them that curse you, and pray for them that calumniate you." Now this is what Catholics do. We pray for these sorry bastards in the hope that somehow they will be spared HELL. They on the other hand do exactly what Christ forbade. They curse us. They calumniate us. They do evil to us who have NOT done evil to them.

Now just WHO IS IT belongs to Christ? Hmmm? It certainly ain't Jack and his Chicklets!

Of course this stuff is desperate, peurile and laughable. It's like throwing slop to the hogs.

But what concerns me is not the hate-crazed fantasizing of the usual suspects, but the boring-from-within that is going on in the Church, namely the treason of clerics. And that treason goes very high up. Keep focussed on those enemies and expose them when you can.

As for the Holy Father, while he never was an admirer of Hitler in the 1940s he is, apparently and tragically, an admirer of the Washington Nazis. See his unbelievable comment to Leon Panetta, liar, assassin, Obama toady, pusher of women into combat and phony Catholic. "Thank you for helping to keep the world safe," said Benedict to this monster.

That is a lot more disconcerting than some youthful nazi salute.

Yeah, I hear ya, Aged Parent. I surely do.