Cardinal Darmaatmadja Resigns -- Only 116 Electors in the Conclave 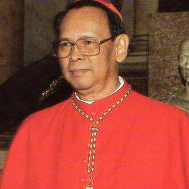 (Rome)  It will now be only 116 and not 117 Cardinals who will participate in the Conclave in order to elect the next Pope.  The 78 year old Indonesian Cardinal Julius Riyadi Damaatmadja and emeritus Archbishop of Jakarta will “of his own free will” not participate in the Conclave, because his state of health no longer allows him to take the trip, as reported by Asianews.

The Cardinal lives in an Emmaus House because of “worsening” health problems for some time, an elder hostel for priests in Central Java.  As Asianews reports, the Cardinal is among other things almost blind.  A “collected,  independent movement” is no longer possible as he himself explained to the news agency by telephone.  “I am convinced”, says Cardinal Darmaatmajda, “it is not possible for me to sit with the other Cardinals in order to elect another Pope.  For this reason he is “extraordinarily sorry”, but he doesn’t want to hinder the Conclave because of his health and possibly bring confusion to the process of the election.


The Jesuit Darmaatmadja was ordained to the priesthood in 1969  and was named the Archbishop of Semarang in Indonesia in 1983 by John Paul II.  John Paull II. was also the one who raised him to the state of Cardinal in 1994 and called him to be the Archbishop of Jakarta in 1996.


Text: Asianews/Giuseppe Nardi
Photo: Asianews
Posted by Tancred at 3:04 AM