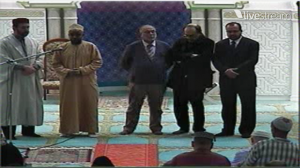 I guess his suit suits him.

Another example of how modernist/heretic/homosexual/apostate filth has spread in the Church, especially amongst the Cardinals, the ones who are supposed to be ready to die for the Faith. Domine, miserere nobis. +JMJ+

It takes no effort at all to think of a few agendas:

-For the perverted...a feeding place and playground for Homosexuals, hidden from the world which at the time still saw their illness for what it is and would have prevented them otherwise.

-For the not perverted but effeminate...a place to live out a vocation of some sort for God because they were not comfortable in the outside world.

-For the Jews/Prots/Freemasons...a way to infiltrate The Church and do Her the most harm from within. The Jews who are not content to leave Christianity alone just want the holy religion destroyed or at least subdued and subservient. The non-Catholics who are too prideful to return to The Church think to just whittle the Mountain down until She is so low to the ground and devoid of holiness that they can just walk in through the front door. The Modernist popes have helped them do just that.

-For those men who are simply fleeing something in the world...mostly they were fleeing Communism. One admitted to me that "I did not want to be a priest. My mother pushed me to do it in order to flee the Communists in our country. At that time it was easier to travel if you were a priest." Today that man would be in his 80s.

Priests do not becomes Homosexuals but Homosexuals do become priests. The same might be said for Modernists and Apostates. At least it would not happen in droves. No, as far as I am concerned we have been invaded by our enemies and dupes of our enemies and it is as simple as that.

If we stop assuming these men are Catholic priests, we simply admit that the Catholic Church isn’t what she was purported to be.

At the very least, you put yourself in a position of authority you don’t have.

Try reading again. I didn't say they weren't priests. I said they may not have been called. Christ chooses priests, the priests don't choose as though it is a mere job.

Tancred,Please abide and correct me if I'm misunderstanding.Among others you have reported on the Lavender Mafia and those in association with them.Is it not true that there are Cardinals,Bishops.Priests who were ordained under false pretence ,their very intention was to bring into and spread sin and heresy throughout the Church? This is what has been reported,claimed by various persons. Some have been directed to investigate the matter;the Polish Priest for one.Throughout the ages there have been ifiltrations into the Church by persons intent to bring harm.One might in not every but surely some instances say that is Satan actively at work to destroy Christ's Church. So are all priests really priests? Bishops? And ChurchMilitantTV:"The Papacy and the "Gay" Mafia.. interesting as always.

Human beings put a lot of trust in other human beings every day. Without that trust, society breaks down and disintegrates. If that’s true for simple professions, how much more true it would be for the more significant spiritual ones.

What is the MATTER with these "Catholics"??? Just LOOK AT THEM!!! Look at that HIDEOUS painting on the wall and look how the people sit. If you can get past all that then look at the devil dancers. SHAME!!!

Tancred,If you are spesking of the validity of the Sacrements administered I agree.But that is trust in God and His Church but not in in all men therein.