Bishop Fellay Keeps Open the Doors of Reconciliation and Restoration 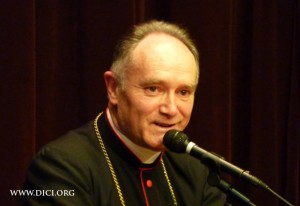 Edit: the following is the interview translated at the DICI site in English from the Nouvelles de France site.  Bishop Fellay makes some salient points about the struggle for tradition and opens the doors toward reconciliation and the continued restoration of all things unto Christ.  Of course, contrary to many parties both within the official Church, Her media, and those outside of Her embrace, this reconciliation is still very much alive and developing:
Your Excellency, would you appreciate it if the last major act of Benedict XVI’s pontificate could be the reintegration of the Society of St. Pius X?
For a moment I thought that, with his resignation, Benedict XVI would perhaps make a final gesture in our favor as Pope. That being said, I have a hard time seeing how he could do so. We will probably have to wait for the next Pope. I will even go so far as to say, at the risk of surprising you, that the Church has more important problems than the Society of St. Pius X, and in a way, it is by resolving these problems that the problem of the Society will be solved.
Some say that you wish Rome to recognize that the ordinary rite is illicit; can you tell us more on this point?
We know very well that it is very difficult to ask the authorities to condemn the new mass. In reality, if what needs to be corrected were corrected, it would already be a big step.
How?
It can be done by an instruction from the Congregation for the Divine Cult and the Discipline of the Sacraments. It’s not that complicated, really. I think that important changes need to be made because of the serious and dangerous deficiencies that make this rite condemnable. The Church could very well make these important corrections without losing face or undermining her authority. But at present, I am aware of the opposition from a number of bishops to the Pope’s legitimate request that the translation in the Canon of the Mass of “pro multis” by “for all” be corrected and replaced by “for many”, since the former translation which can be found in several languages is false.
Would you like to say anything about Vatican Council II?
As far as Vatican II is concerned, just like for the Mass, we believe that it is necessary to clarify and correct a certain number of points that are either erroneous or lead to error. That being said, we do not expect Rome to condemn Vatican II any time soon. She can recall the Truth and discretely correct the errors, while preserving her authority. Nonetheless, we think that the Society contributes to the Lord’s edifice by denouncing certain disputed points.
Concretely speaking, you know that your demands will not be answered overnight.
Absolutely, but little by little they eventually will be, I think. And the time will come when the situation will become acceptable and we will be able to agree, even if that does not seem to be the case today.
You met with Benedict XVI in the first months of his pontificate; can you tell us what your impression of him was at that time?
I can say that I met with a Pope who had a sincere desire to bring about the unity of the Church, even if we were not able to agree. But I assure you that I pray for him every day.
In your opinion, what was the most important act of his pontificate?
I think that the most important act was without any doubt the publication of the Motu Proprio Summorum Pontificum which grants to priests everywhere in the world the freedom to celebrate the traditional Mass. Might I add that he acted with courage, for there was opposition. And I think that this act will bear very positive fruits in the long run.
(Sources: Nouvelles de France – DICI#270, Feb. 15, 2013)
Posted by Tancred at 4:36 PM

I find Bishop Fellay to be very confusing. Last I read he decided there was not to be any deal with this Pope and now I read here he thought the Pope would make a final gesture to the SSPX? Given the state of the world and church today the next pope could very well be the anti-pope (false prophet) of antichrist. Watch and pray!

Dolorosa, don't you have anything better to do dear?

Oh come on now Anon,don't you ?

Look at me. I still don't. And besides, this is pretty important I'd say.