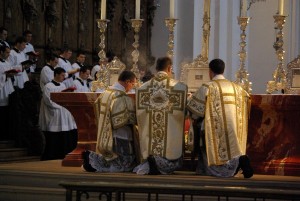 (Weingarten) The Community of the International Seminary of the Old Ritual Society of St. Peter made a visit on the 8th of December for the High Feast of the Immaculate Conception to Abbey Weingarten. The Holy Sacrifice of the Mass is being celebrated for the intention of the benefactors of the Seminary. The Seminarians received the blessing of a blood reliquary guarded by the monastery since 1094.  It contains some soil stained with the blood of Jesus from Golgotha.

The Benedictine Abbey Weingarten was founded in 1056 as a Royal Abbey.  In 1803 the monastery was abolished by an Imperial Deputation.  However there the Archabbey of Beuron however attempted resettlement.  In 2010 followed the second extinguishment of the monastic community.  Internal conflicts had driven the convent to dissolution.  The monks of Weingarten still living there have found a new cloister.  The most famous among them is the 101 year old Moral and Pastoral theologian Father Anselm Günthör.

The visit of the seminarians of the International Priestly Seminary of Wigratzbad and the celebration of the Old Mass, which is used as a parish church, but which is joined by orphaned monks, has been filled with new life, who carry the seeds of renewal in them.  With that there is a photo gallery which shows also some events taking place during the visit of the seminary community in October to the Church of the former Imperial Abbey Salem and St. Nikolaus Münster of Überlingen. 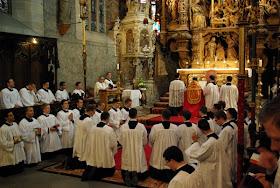