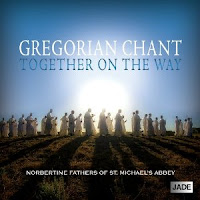 (Washington) The regular Choir Brothers of the Premonstratensian Abbey of St. Micheal in California have published a new CD with Gregorian Music from the liturgical hours of their community. The Abbey of Silverado in Orange County is biritual and preserves the "Old Mass" as awell as the Novus Ordo according to the prescriptions of the Second Vatican Council for Liturgy. The Canons Regular make a special consideration for the special value. Additionally they seek to presever the living content of their own order's special forms. Gregorian and Liturgy has offered a growth of vocations thorugh the years for the abbey. In an ineterview with the Catholic News Agency (CNS) the Premonstratensians have explained why the brothers have taken this particular manner for the spreading of Gregorian Chorale.

It is not so much a musical point of view, which they are seeking after, rather a conscious apostolate for the New Evangelization and the promotion of vocations.

The Abbey has led to numerous voations in its fostering of Gregorian Change and Liturgy.

"The beauty is made through the lifting up of the faithful, in order to build them, so that the Father can be praised in Mass" said Father Ambrose Criste, Noice Master of the Abbbey.

The 13 tracks of “Gregorian Chant: Together on the Way,” includes liturgical texts, hymns, and a litany. The songs were recorded in the St. Michael Abbey chapel, located in Silverado.

Father Chrysostom Baer, the abbey's cantor, said he chose the selected pieces as “the most Catholic things I could get my hands on.”

The selections were originally sung by the Norbertine canons to introduce and complement three performances by the Pacific Symphony Orchestra in Costa Mesa, Calif.

“We were going to give them some Catholic prayers,” said Fr. Baer, “and hopefully through the beauty of the moment, they would join their hearts to ours.”

The selections sang by the Norbertines at the concert hall in February of last year were then recorded so as to bring the music to a wider audience.

“It's a really excellent vehicle for evangelization,” said Fr. Baer. “I ran into someone just two weeks ago who recognized our habits from one of those concerts, who had more questions and wanted to come visit.”

Fr. Criste noted that their music is so beautiful because chant plays a major role in the Norbertine life. “It's something we do throughout the day, every day,” he said.

The abbey's public mass is chanted four days a week, and every day the Liturgy of the Hours is chanted. The seminarians of the order have choir practice five days a week, “which consists almost entirely of Gregorian chant.”

Fr. Criste said that chant is not just for religious communities. In the parish, “ideally, I would think it should play a daily role,” he reported.

“The (Second) Vatican Council was clear that pride of place goes to Gregorian chant, and that's just following in the tradition of the 20th century, all the way back to Pope St. Pius X.”

While acknowledging that not all parishes can have as wide or difficult a repertoire as can abbeys, he said, “everybody could sing some chant.”

Fr. Baer said the community hopes that its dignified, traditional liturgy “gives people an experience of what we know the Council was asking for in the public celebration of the liturgy.”

St. Michael's Abbey was founded by a group of refugees from a Norbertine abbey in Hungary in the 1950s which was threatened by Soviet control. The community currently numbers 76, including both priests and seminarians.

“God has blessed us immensely with constant vocations,” Fr. Criste said. “Every year we get a handful of young men who want to join our way of life, and given today's culture where they can do anything else that would be more 'exciting', that really says something about the grace of God.”

Norbertines are an order of canons regular also known as Premonstratensians. Though they are based in an abbey, they have pastoral ministry as well.

The primary apostolate of St. Michael's Abbey is its prep school for boys, though it also teaches and ministers at schools and parishes in the Orange and Los Angeles dioceses. Nearly all the public celebrations of Mass in the extraordinary form are celebrated by canons of St. Michael's Abbey.

“Together on the Way” will be St. Michael's fourth CD release. All are part of an effort to get the word out about the community, as they aim to build a new monastery and school to accommodate their vocations boom.
H/t Katholisces Source:Catholic News Agency Buy the LP here: none.
Posted by Tancred at 6:15 PM

(If you're on meds today, don't you dare drive.)

You misspelled "noise" and I guess that's the difference between an abbey and an "abbbey", the latter has a Noise Master.

@ Micha Flapjaw
That is all you have? You have no real comment to make regarding the article and so you pick at a typo on the word "novice"?? ROFLMAO! Wow. You're a real idiot.

The Norbertine Fathers are a godsend to Southern California.

Three years ago a Norbertine Father named Ramos gave one of the nicest EF Triduum masses you would ever see at Mission San Juan Buenaventura in Ventura, California. Archbishop Gomez coud man all the Latin Masses he wanted with these Holy priests.