Cardinal Sarah: If "Catholic Charity" Betrays the Church -- Not Everything That Says it's Catholic is Catholic 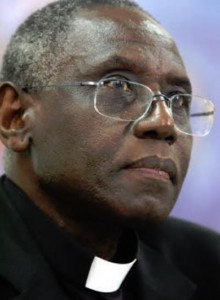 Edit: you may have seen what this Cardinal has already said about clergy who fail to preach against abortion and aberrosexual marriage.

(Vatican)  With the Motu proprio Intima Ecclesia e natura of the 11th of November, 2012 about the charitable work of the Catholic Church as Pope Benedict was barely recognized by the public, but it set radical interventions against Catholic help organizations in motion, which are Catholic in name, but in word and deed are not. This refers to organizations that help the "non-negotiable values", such as attacking the defense of the family and of life. With the recently held Vatican General Assembly of the Pontifical Council Cor Unum, which coordinates the charitable work of the Church worldwide, the Pope is asking for the proceedings  to enter a concrete phase.

That Rome is taking this seriously, became clear with the opening speech by Cardinal Robert Sarah, who is chairman of the Council since 2010. The speech was published Osservatore Romano on the 18th January. It is a hard accusation and an unvarnished analysis of the charitable organizations of the Catholic Church. There, the Cardinal said, a "laicizing ethics" [Your Professional Catholics], which is represented by "certain international institutions" and "will be imposed by force through complex political, legal and cultural mechanisms upon cultures and peoples around the world." This would be disclosed "as a negative and destructive view of man and woman."

Catholic organizations have made "secular ethics" their own

These mechanisms were perfectly attuned, wrote the sociologist Massimo Introvigne in an article for La nuova Bussola quotidian. Poor countries that are dependent on the provision of international credits are literally blackmailed. Loans are granted only if the States in return accept a particular ideological agenda. This standard includes the legalization of the killing of unborn children, recognition of homosexual unions and mass dissemination of artificial contraceptives.

Pope Benedict XVI. had denounced this blackmail method during his pastoral visit to Africa. Since his indictment could not penetrate to the global public, an immediate anti-papal campaign had picked a quarrel. The whole issue has been reduced to condoms. Anti-Religious groups flooded the Internet with all possible and unspeakable graphical variants of the subject "and Pope condom" or "condom and church." An objective consideration of the Pope's actual statement did not take place.


Church takes action against Charities that call themselves Catholic, but are not

The whole world imposed the "inhuman contraceptive mentality of the West and the intolerant gender ideology and their disdain of people created in God's image as male and female," said Introvigne. This form of violence must be identified and denounced tirelessly, the sociologist. It would also be possible, if at least the Catholic organizations had shut themselves to this ideology and would reject any collaboration.

Pope Benedict XVI. complained in the Motu proprio Ecclesia intima e natura that the not the case. Thus it was not without a bitter undertone that Cardinal Sarah affirmed the Pope's assertion. Some members of the church who work in the charitable sector would have let themselves be seduced by a "purely secular ethics of worldly charities". And to such an extent that they had abandoned their Catholic identity and made the secular position completely their own. These Catholic in name only associations "pursue the same goals with the same destructive anthropological ambiguous language and the same slogans," the Cardinal said in his speech.

The charge is extremely serious. It says that there are Catholic institutions, which collaborated in the destruction of people, mentioned in the Pope's December Christmas message to the Roman Curia, which Benedict XVI described as the most dangerous threat to the Church and humanity. Since these organizations ignore the Church's Magisterium, they lose their faith together with the ability to act for the public good, went the the Pope's warning.

"The history of the West has sufficiently proven the connection between infidelity to the Magisterium and loss of faith," said Cardinal Sarah. According to the Chairman of the Pontifical Council Cor Unum, the secularization of Catholic charitable organizations has been already more than just a threat.

Catholic institutions have to oppose the culture of death

The danger of this situation is not to be undervalued, said Introvigne. Forces act in the world today, "wishing the death of man, created by God, in order to destroy the miraculous image," said Cardinal Sarah. It was not just about theoretical ideas, but hard, deadly facts. To achieve their goal, these forces would use all means "to globalize the culture of death." As a particularly perfidious example of this, he cited the effort to camouflage the spread of abortion logic as an "aid" to the woman.

The "unacceptable situation" has arisen from the myth that the major international organizations would always have been basically right and had only the good of all in mind.

Breaking the Myth of the "good behavior" of international institutions

It is time to change that, says Introvigne, what the Catholic area always means conversion. "The grace of conversion helps us to overcome this logic and start new in Christ. The prophetic mission of the Christian calls him to bear witness to Christ and the Gospel values. Charity is not a specialization of the Church. It is the life of the body as a whole, it is a universal appeal to live our faith and to help humanity through the Gospel to grow," says Cardinal Sarah, in his opening speech at the plenary session of the Pontifical Council Cor Unum.

Edit:  Here's some of the coverage on Vatican Reports: