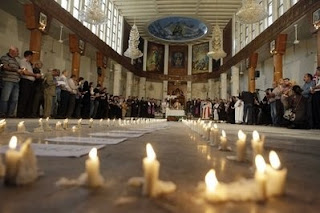 (Bagdad) On the same day in which the Syrian-Catholic Cathedral was solemnly re-consecrated, the Grand Ayatollah issued a Fatwa against the Christians of Iraq.  The Christians are expected to convert to Islam or are liable to be killed.  The Catholic Cathedral was the scene of a bloody attack on 31 October, 2010.  An Al-Qaeda unit attacked the church, as the Christians there were celebrating Holy Mass. 58 Catholics lost their lives in the attack, among whom were two priests.

The Shi'ite Iraqi Grand Ayatollah Sayid Ahmad al Hassani al Baghdadi announced his call to murder Christians with the Egyptian television broadcaster Al Baghdadia.  Al Baghdadi, which belongs to one of the most radical members of the Islamic Jihad, is calling Christians as polytheists and friends of Zionists.  Al Baghdadi's call to the Christian minority of Iraq reads:  "Convert to Islam or Die".  The women and girls of the Christians "can be legally considered to be wives of Muslims", said the Grand Ayatollah.  Al Baghdadi,  who was born in Nadjaff in Iraq, is one of the "holy cities" of Shi'ite Islam, lives today in Syria and there supports the armed struggle of Islamists.

The Catholics of Bagdad regard the Fatwa as "extremely troubling".  Whatever effect they will have, they should not be underestimated.  Cardinal Leonardo Sandri, of the Prefect of the Congregation for Oriental Churches,  undertook the re-consecration of the Cathedral.  In his sermon he spoke of the murdered Christians in 2010, that the tears and the blood of martyrs are seedlings, which will bring forth new fruit.  Cardinal Sandri held a five day visit to Iraq, in order to strengthen the Christians there during the year of Faith.

Chilling but inevitable with a faith that is grounded in violent opposition to Christianity. In Britain we are sleepwalking into an era when, if the current trend continues, Islam will have rule in 20 or 30 years time.

The Ayotollah dude had better recall a certain battle at sea and what the Mother of God thinks of his religion of the Devil.

Then again...Pope Pius V we ain't got.

oh maybe we should sit down and try to understand those Mohammedan Satanists some more just like we're supposed to go and understand all the other false religions created by Satan since Vatican 2. ''Oh they didn't mean it (what they did) remember we worship the same God as them who will judge mankind on the last day.'' yeah I'm sorry no we don't because I believe Christ will come to judge the living and the dead and they say Allah will come to judge living and the dead, they deny the Trinity, the divinity of Christ make Muhammad greater than Jesus and then the Mahdi you know there 12th Imam is going to be greater than Muhammad. Also the Muslim Jesus is going to return and force everyone to convert to Islam or die and at 1 particular battle the 12th Imam is going to ask the Muslim Jesus to pray over the troops or bless them and pray to Allah and he's going to defer to the 12th Imam and bow down to him. Yeah well the Vatican 2 cult does worship the same God as the Muslims, hes called Satan. It's no wonder that they want to associate and sympathize with and kiss the butts of all these other false religions in particularly Islam after all the Vatican 2 cult which is not the Catholic Church is crammed full of child molesters just like Islam is so yeah it's 2 massive groups of pedophiles want to hang out with each other. they may have the same God as that deranged war Lord pedofile but I don't. Mohammed is in Hell being raped by pig dog demons and he likes it...ALOT!!

I guarantee you that some dishes in the so called Catholic Church of today will go and do a mass for the Mohammedan suicide bombers Souls who bum rushes into the next Catholic Church and kills another 100 people. And don't forget all those people who were blown up all those Catholics they went to heaven and the Mohammedan suicide bombers went too, now they're all at peace and cool with each other in the presence of God.