Edit: The following translation and title sort of speaks for itself.  Not only does this seem to spell the end for Kreuz.net, at least in its past incarnation, but it may spell the end for the pro-Roman and conservative Network of Catholic Priests, which will have to find a new spokesman now that Father Jolie has been severely and publicly humiliated for his association with kreuz.net.  Network of Catholic Priests has probably embarrassed Germany's Old Liberal elites on everything from Church-tax, to its steadfast refusal to obey the Vatican's call for revising the Missal according to its guidelines.

Another priest from the Diocese of Aachen is trying to disassociate himself from kreuz.net as well.

It's also the case that nobody at this anti-Catholic newspaper cares about freedom of speech in present day National Socialist Germany. 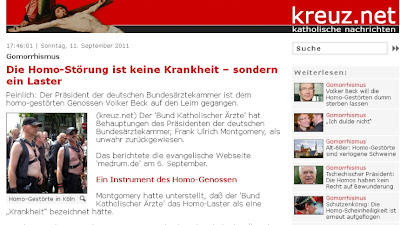 The Bishop of Mainz, Karl Lehman is happy that "kreuz.net" is offline,  however defends himself from a wholesale condemnation of the Church.  At the same time there is substantial evidence that they have more with the agitation site that they will avow: in the criticism  there is a Pastor from the Diocese of Aachen.

Karl Cardinal Lehman has to soil himself in the internet sewer kreuz.net. The intonation of the tirade can amplify itself well, as the homophobic vocabulary of the site has recalled terms like "Gommorrhists" and "gay perverts" which were still comparatively moderate as the site goes.

But since the beginning of December, kreuz.net is no more.   And for this Bishop Lehmann thanked then --  the gays!  That a German Bishop has dared this, is signifies something unparalleled.   In Sunday's published edition of Glaube und Leben [Faith and Life] of the Church newspaper of the Diocese of Mainz, Lehmann wrote:  "It is shameful for the Church that it was at first the initiative of the Bruno-Gmünder Verlag [Publisher of pornography]  and the interest of the Federal Crimes Office together with open debate prepared the way for the unholy goings on."  The Church has not done this with its own means.  "For that reason why all thank, who have contributed clarification, even though they are not friends of the Church."

It is still indeed not decided yet, so long as the Public Prosecuting Attorney have still not been able to determine the operators, and self-described insiders of the recent departure of the site tell of a new appearance on the internet.  But Cardinal Lehmann, 76, has not yet breathed deeply over the preliminary end of the "damaging intrigue".   Why the German Bishops' Conference, who he led till 2008, did not support the proposal "Stoppt kreuz.net" of Homo-Pornographer Bruno Gmunder, was something that Lehmann was silent about. This initiative had inflamed media interest and fanned the police investigation.

Lehmann Criticized the General Suspicion Against the Church

Instead the Cardinal accuses the anti-Kreuz.net activists of turning the Church into a scapegoat.  Because kreuz.net characterized itself as Catholic, several informants, authors and if possible, site administrators came from the clergy, even from the Roman side which has raised the suspicion of some critics of the Church.  Lehmann only criticized this: The opportunity has "been exhausted in an all encompassing criticism of the Church. The deplorable behavior was only less equal than a large swamp. The whole Church is dilapidated..."  In contrast, on the one hand, Lehmann defends calls for the Church to an "examination of conscience of itself at all levels". [Only on his own Old Liberal terms]

And he defended his own actions against a Pastor of his Diocese,  to whom he extended clemency, even though the Bishops' Conference had demanded administrative legal steps against collaborators of the incitement site.  He has given the defendant the benefit of he doubt, wrote Lehmann.  Yet where  is the doubt, if, as he himself says, "that he had participated in the monstrousness, generally in the organization, which had instigated such a hate campaign."?  The Pastor [Father Hendrick Jolie] had lied to him and to the public about his journalistic activities, and only confessed after he could not refute the allegations.  It might have been part of the arrangements with Diocesan authorities that he withdraw from his anti-reformist Catholic Priest Network (KNP).  His post as speaker would no longer be exercised in any case.

The Network now has only two speakers in Germany.  One of them is [Father] Guido Rodheudt, pastor of Herzogenrath, Diocese of Aachen.  He argues in written submissions, denying any complicity with kreuz.net.  However, he acknowledges that he has read the site regularly.  In an interview not yet broadcast by WDR he said, with kreuz.net it was "like a dunghill, which is next to a trash heap in which there are still some edible tomatoes that have really lost something there."  When looking for a tomato in a manure pile, one is worse off.

Apart from that, more evidence has emerged that [Father] Rodheudt had more to do with the hate site than he now knows or wants to admit.  An activists from "Stoppt kreuz.net" says [Father] Rodheudt has a much more combative temperament than his colleagues in Mainz.  But yet he who decidedly expresses himself in interviews on the theme of the faith, yet has only read kreuz.net and never written there.

WDR asked Rodheudt about an internet link between kreuz.net and the website of the NKP (Network of Catholic Priests).  Such links are based as part of a partnership: kreuz.net demanded that if they put their advertising banner on the hate site, that in return they link to kreuz.net.

But the NKP didn't just put up a single link to its page.  It even put up a live ticker, which means that the headlines of new posts of the anonymous users in question, were sent from the hate site to the site of the NKP.   On the equally devout Catholic site gloria.tv, there is an interview with Guido Rodheudt where the live ticker from kreuz.net is still active.  It was already in January of 2009 that NKP told the Süddeutsche Zeitung that this live feed had stopped.  A colleague had asked his "dear brethren" to delete this connection.  He referred to the intervention of two professors who had complained about the "corrosive anti-Church venom of kreuz.net".

Guido Rodheudt says the Priest Network had deleted the link itself.  The site had changed and the style and content of kreuz.net had become unbearable. But the network had already long been cooperating with a "dunghill":  One only needs to look at posts from 2007, which put through titles like "Sodomistic Fornication", the "Homo Concubinage" and "The Homo-Ideological Manipulation."  That was obviously unsustainable for [Father] Guido Rodheudt.

In November 2007, the contribution of a Holocaust denier, contained the following sentence, "Even apparent inconsistencies are forced upon citizens as truths of faith -- whether in connection with gas chambers, Jews allegedly turned into bars of soap or with the actual numbers of casualties." And this stood right next to a banner of the Church Music Association, Sinfonia Sacra.  As he was and is the chairman of this organization, [Father] Guido Rodheudt, was just a priest looking for tomatoes in a manure pile.

Why don't they put the site up again anonymously? I can't believe Kreuz.net tolerates this.

There will be a new site.

Homosexuality is a sin. said...

I figured as much. I'm sure the unveiling of the new site will be the cause of much wailing and gnashing of teeth among the sexually depraved. It will be awesome. I already have my popcorn bowl out.

OK, Your Holiness, Cardinal Lehmann has just done something so outrageous that not even the most liberal of liberals has dared to do.

The question now is, Your Holiness, and this is stated with all due reverence for your sacred office, what are you going to do about Lehmann?

It might be up and running now, somewhere. The German Bishops are just too corrupt and unaccountable for something like this not to exist.

In the season of *Let nothing you dismay*, I am dismayed.