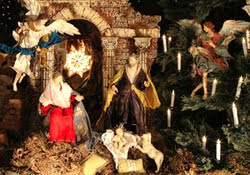 Edit: After hearing about how a man dressed as a Roman Centurion attacked and substantially damaged an ancient local church in Rome recently,  here's a more uplifting tale describing the constant war against the powers and principalities.  There was a viral meme a few years back that a Bradford City Council in England was abolishing Christmas to mollify Muslims, by referring to Christmas as "Midwinter Festival"?  Still, atheists in Santa Monica have the same idea.

Yes, it's happening again except this time it's Italy and Catholics aren't sitting back, letting it happen and then bemoaning that it happened with the usual resignation easily detectable in Catholic and conservative circles these days in Northern Europe and the United States.

In the province of Caraoso in Piacenza, Italy, a school Principal has overstepped his bounds and will now have to find himself a new job.

This just in from a correspondent about a really interesting situation in Italy where Cultural Marxism attempts to rear its ugly head and is stomped by an angry mob of ordinary Italians.  People in Europe don't appear to be quite as sanguine and passive about the authorities destroying their traditions as are alleged Catholics in the United States.  Nativity scenes are routinely attacked by the ACLU or local miscreants and Anarchists with impunity:

A principle of a public elementary school in the Province of Piacenza decided to ban any mention of Christmas (including the display of the traditional nativity scenes) in order not to "offend" north African students. At which point the parents exploded in protest. The mayor of the town promised to personally deliver 4 nativity scenes and will press to have the principle transferred out of the school. The protests have arrived at the ministry of public education in Rome. Can one imagine such a protest happening in the oh-so-Christian USA? No, one cannot.

Proud to be an Italian Catholic said...

The "authority" obviously belongs to the righteously angry parents. Good on these Italian Catholics. This is how Catholics in an Italian parish in a mill town acted a few decades ago when a priest starting preaching un-Catholic Vatican II nonsense from the pulpit. Father got a visit one evening by a handful of men from the parish. A respectful visit to be sure but Father never repeated his errors from the pulpit and soon transferred out.

Bravo! Would that our own country's men and women showed such backbone and love of our Lord.

I think the way to handle this hatred of Christianity, it to put as many nativity scenes, 10 commandment signs, statues of Christ and the BVM, the crucifix (not just the cross) as many places as possible ON PRIVATE PROPERTY. AND have the blessed!! This is important to have them blessed.
I believe we would see a big change in everyone.
I for one am going to do this
I also am giving "gifts" this year to all my family -which I could not do financially before. I AM GIVING GIFTS OF PRAYERS FOR EACH FAMILY THIS YEAR-- NOT MATERIALISM.
PLEASE FOLLOW THIS AND MAKE IT A TRADITION. AND SEE WHAT CHANGE WE WILL SEE IN THE COMING GENERATION.-AND OUR LEADERSHIPS.

The reason why the Catholics in Italy still have a bit of backbone is that they have had and been a mostly Catholic country for centuries, whereas the U.S. has been protestant by and large with a persecuted minority of Catholics; and thanks to the religious indifferentism engendered by the "new evangelization" of Vatican II and it's 'popes' the 'bishops' here continue in the same lackluster Americanist attitude of endorsing religious liberty ala Cardinal Gibbons - a masonic idea condemned by the popes before Vatican II wholeheartedly - anyone can pick up TAN's book THE POPES AGAINST THE MODERN ERRORS and see which popes did condemn that.
The U.S. is also under the sway of a marxist police state thanks to the post 9/11 world and it's 'save us from the terrorists' mentality, by which they mean anyone who still wants to have the Constitution rather than world government and the resultant tyranny thereof under the Marxist United Nations - which ALL the Vatican II "popes" have called THE LAST HOPE OF MANKIND. If your blog still endorses the criminal judaeo masonic usurpers of the papal chair as legitimate than you are helping the revolution and are as much a part of it as this idiot principal who wanted to ban the nativity.

Who are you to abolish Popes?