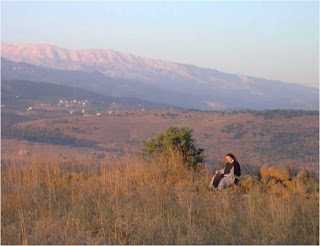 (Damascus)  They came to the near East in 2005 with the intention to live out the Christianization of the first centuries after Christ.   Their history is comparable to the Trappist monks of Tibhirine in Algeria, who in 1996 were murdered by a moderate Islamic group.  Xavier Beauvaus created a memorial for them and their martyrdom by the film "Of Men and Gods".

The comparison is more pressing when one things of the five Trappists, who left their peaceful and isolated Cloister in Valserena in Tuscany, Italy, in order to go to Syria.  A land whose internal situation had been already tense and in the midst of a civil war with thousands of deaths and flooded with hundreds of thousands of refugees. 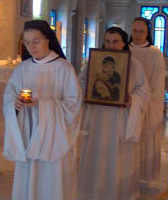 Why have they decided to found a new Cloister in an unstable country like Syria?  "Because Christianity had developed here and spread from here to Asia Minor, Greece, Rome, Armenia, India and China", say the sisters.  "in the first centuries the mission was led by a living Monastic movement, which existed alone and independently of one another here and in Egypt."  The sisters recall St. Ephraem the Syrian, Saint Simeon the Stylite, St. John Chrysostom or St. John of Damascus, whose traces they follow.  "Going out from our Latin and Benedictine Tradition we want to follow the stream, because we are convinced of the rich fruits, which will come about in an exchange between the West and Eastern heritage of Christendom." 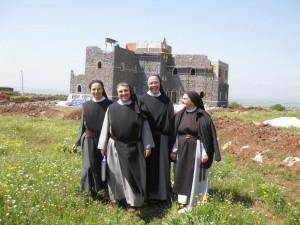 So the Cloister of Azeir exists amidst the civil war afflicted cities of Homs and Tartous in Central Asia. The sisters feel a mission in that, which resembles that of the monks of Tibhirine:  to help Christians and Muslims without respect to religion, to be a lighthouse of peace and harmony in the civil war,  which they did not foresee when the five Trappists set foot for the first time on Syrian soil. "Now we belong to these people.  The fate of the Syrians is our fate,"  says Abbess Monica to AsiaNews.

The nuns reported on their internet site established and independent of all propaganda of one of the other sides of the civil war and the fate of Syria's Christians.   Some of the letters of the last months could have been called out.  They described for everyone the suffering of the civilian population.  For them the Cloister is clearly a sign of hope, because it is "a place, where God is really present through the Eucharist and through the Church, through the prayer and the brotherly community.  It is a blessing for all."

"Why should we go away?" was the astonished response of the sisters.  "The people here ring our door.  They seek help, diverse help.   They ask for food, they seek consolation, young men have started to come to us, because they are seeking someone to help them to understand things, to reflect, to grow innerly."  The Cloister offers already numerous people sanctuary and accommodation, people, who are have been made refugees by government troops or the rebels, people who are pursued by one side or the other.  Even as a place for secret business, the Cloister is on hand.

"We are called to give a witness of our Christian hohpe, which is stronger than all worry.  Why should we go away from a place, where the people so desperately need this hope",  said the Abbess to Asia News.