It's the New Springtime!

Edit:  here's still more insight into why the decadent monastery of St. John's Abbey won't support the Archbishop's Defense of Marriage campaign, or obey lawful authorities.  It's breathtaking that they can even continue to operate as they do with impunity.  The case of Roger Julkowski is like a horror story, and the very credible testimonies of certain victims implicate the winningest coach in football history of doing nothing while evil men did their work.

Having attended Catholic schools for most of his education, Roger Julkowski became an instructor in the Literature Department at St. John's University in the late sixties where he invited students, both male and female, to live with him in an "experimental" colony known as "The Farm".  Although he was reported by football coach Jim Gagliardi for allegedly molesting a student he was introducing the campus, Julkowski kept his property in the nearby Flynntown enclave of St. John's for the better part of the years we affectionately refer to as the New Springtime where he was able to molest and grope his way through many years of alcoholism and possible suicide when he finally died in 1993.

Despite Gagliardi's knowledge of this man's proclivities, he did nothing as the serial molester lurked around the campus in search of sexual liaisons with students, faculty or whomever.  Age wasn't an issue either.  He was active in fellow molester Msgr Dale Fushek's Teens Encounter Christ, movement, which provided him with easy access to one of his victims.


Here's the account from the Pine Curtain, shocking for many different reasons, including the fact that it doesn't seem it will make it on any of the major news outlets, despite the gravity and obvious impunity with which the predator was able to take advantage of his presence in and around Collegeville, St. John's University and Abbey: 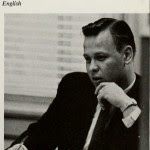 During the 1965-1966 school year, Julkowski was faculty advisor for the Sagatagan, SJU’s yearbook. Julkowski had taken over for Father Hugh Witzman, who held the position for only one year.
To the left is a photo of Julkowski from the 1966 SJU yearbook. He is listed as an English professor.
Departure from Saint John’s University
When and why Roger Julkowski left Collegeville in the mid-1960s is still unknown. According to one of the students who worked on the yearbook in 1966, Julkowski “left abruptly”.
Julkowski lived within walking distance to his job as an English professor and yearbook advisor.
Why would he leave?
Continue to read at Pine Curtain....
Posted by Tancred at 8:42 PM