Is Bishop Williamson's Expulsion in Connection With the Gas Chamber Question? 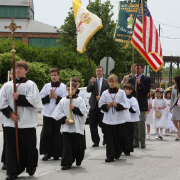 The timid German speaker for the Society of St. Pius X has told the slanderous extortionate media what they want to hear.

(kreuz.net)  Bishop Richard Williamson has been being removed for years by the leadership of the Society of St. Pius X, and has refused to render obedience.

This is what Fr. Andreas Steiner, the speaker of the German District said on Wednesday in Stuttgart to the news agency 'dpa'.

Exclusion for the Vatican Reconciliation?

The article cited an indirect statement by Father Steiner:  "The decision is in connection with the interview for Swedish television by the Bishop, in which he [allegedly] denied the Holocaust."


The scandal sheet ‘Süddeutsche Zeitung’ mentioned another sentence from the interview.

Therefore, Father Steiner is as yet entertaining illusions about the Vatican negotiations: "The decision will certainly make the discussions with the Vatican easier."

The Catholic publicist Robert Ketelhohn rebutted both statements by Father Steiner in the forum 'kreuzgang.org' as "rotten cheese".

It is to act according to an unfounded misjudgment.

It is completely and utterly absurd canonically speaking to have made for an expulsion with the statements by Msgr. Williamson about the gas chambers in Auschwitz.

Then it would Bend the Law

Apart from that  "in this situation he bends the law as a serious offense to the superior."

Ketelhohn is astonished at this that Father Steiner bends the law to the superior without noticing it. [In German Law, Rechtsbeugung is a serious offense where a Judge proves to be partial either for or against a case.  It contains a sentence of five years.]

This is clearly meant, "to please the media".

And Yet Jewish Special Interest is Irreconcilable

Father Steiner's obvious illusions about understanding the world will not hold for long.

For the anti-Catholic "Jewish World Congress", the expulsion has come "too late".

The credibility of the Society of St. Pius X could "not" be reestablished -- was its familiar stitch.

Additionally, the usual Jewish campaigning organization 'Anti-Defamation League' defamed that the exclusion of Msgr. Richard Williamson has not paid for the guilt of his "detestable views".