The Viennese Comrades and their allies in the Old Liberal establishment are silent against the violence of the red lacquered Nazis and are pleased too. 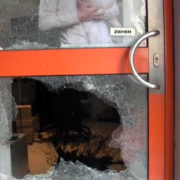 (kreuz.net, Vienna)  Till Sunday the international representatives of  pro-life organizations are meeting at a big "World Prayer Congress for Life".

The organizer of the event is the world-wide pro-life organization 'Human Life International'.

The event is being held in the noble Palais Niederoesterrech in Vienna's center.

The program has a long line of lectures by Neoconservative priests, prelates and bishops.

The Pro-lifers go to the Street

Two events during the Congress deserve some attention.

On Saturday the emeritus Bishop of Feldkirch, Msgr Elmar Fischer, held a New Mass.  After that, he amazingly joined life protectors in a prayer vigil outside of one of Vienna's abortuaries.

On Saturday evening Bishop Klaus Kung of St. Polten held a Marian vigil in the centermost Church in the city.

Then he led a procession of light to the tomb of the innocent which took place in front of the Church.  There he bestowed a Marian blessing.

Abortion fanatics have called for violent counter-demonstrations during the Congress.

One of the hate placards showed a masked woman who was scantily clad, with a weapon in her hand and a bull horn in the other.

The target was described as:  "Vatican"

It is a unimaginable in legitimate countries  that the police -- even among the Communist-ridden Viennese police department --  that such demonstrations are tolerated.

Attack on an Office of 'Human Life International"

The left violence took place in the night on Thursday to Friday.

The antifascist Neonazis effected an attack on the office of 'Human Life International' in Vienna.

The extremists threw mason jars through the glass entrance door of the office.  The doors were completely destroyed.

Politics and the Police Protect the Antifascist Neonazis

It covered a computer, some office furniture and the floor of the office.

One of the jars didn't break.  It was taken as evidence by investigating police officers.