He was a Great Franciscan and Explorer and Probably a Saint


Presently, America is celebrating Columbus Day. In many other parts of the world it is celebrated on the 12th, which is also the Feast of the Pillar of Our Lady. Unfortunately, many of countries have attempted to transform the great feast into a politically correct melange, reducing the glory and wonder of this feast, falling as it does after the feast of Our Lady of the Holy Rosary.

The tomb of Christopher Columbus- considered a saint by many- in the cathedral of Seville. The statues bearing the reliquary represent the kingdoms of Castile, Leon, Aragon and Navarre. -JDB 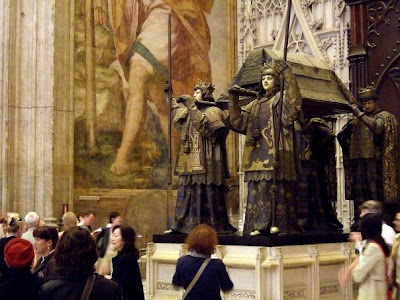 A good source for debating your less-than-manly opponents around the water cooler, would be to start with an excellent article by New Advent, which challenges a lot of the myths and gives a very unemotional account, unpolluted by malicious contemporary commentators.

Here's a nice writeup from TFP:


1. MYTH: Columbus was sailing to prove the world was round.

FACT: Every educated person at the end of the fifteenth century knew the earth was a sphere, a fact known since antiquity. What was in dispute was the earth’s circumference, which Columbus underestimated by one-fourth.

FACT: The royal treasury of Spain was depleted after the completion of the conquest of Granada early in 1492. However, Luis de Santangel, the royal treasurer, was able to secure funding by reaching out to the Crusading societies throughout the Mediterranean, as well as other financial backers from Spain and elsewhere. The crown put up very little to finance the journey.

FACT: Because of the dangers involved, there were no priests or friars on the first voyage, despite the deep piety of Columbus. Many of the paintings of the first landfall in the new world on San Salvador show a priest with Columbus—contrary to the facts. There were five priests on the second voyage: Benedictine Father Buil; the Jeronymite Father Ramon Pane; and three Franciscans.

FACT: Slavery was already widespread among the native Indians when Columbus arrived. Columbus was insistent on the fair treatment of the Indians, a policy which gained him many enemies as governor of Hispaniola. Bartolome de las Casas, a Spanish friar who worked for the protection of the Indians, is quick to excoriate his fellow Spaniards in their grave abuses, but is filled with nothing but respect and admiration for Columbus. The mass subjugation and importation of Africans to the Americas did not begin until a generation after Columbus’ death.

5. MYTH: Columbus died a pauper, in chains, in a Spanish prison.

FACT: Despite the fact that the Spanish crown retracted some of the privileges promised to Columbus, he was relatively wealthy at the time of his death. Although he returned to Spain in chains in 1500 after his third voyage, the King and Queen apologized for the misunderstanding and had them removed.

Email ThisBlogThis!Share to TwitterShare to FacebookShare to Pinterest
Labels: Christopher Columbus, Elites, Feasts, Our Lady of the Pillar, Saints