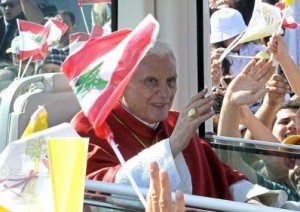 His guardian angel was working overtime. ☺

Far be it from me to minimize any legitimate concern over our Holy Father's safety but I must say that this incident has a rather peculiar smell to it. Since Hezbollah was on record as helping to guard Pope Benedict during his visit to Lebanon it seems strange that they would at the same time be masterminding, or being complicit in, a personal attack on the Pope.

There are far too many false-flag incidents that have implicated Muslims, both the fanatical kind and the mild kind, that have been orchestrated by Washington and Tel Aviv through their myriad proxies to make me accept this story uncritically. I will be watching developments keenly.

Dan, I think Hezbollah-affiliated groups just revealed what they found out from the Lebanese security services.