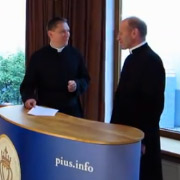 
Edit: Missing from the Kreuz.net account is the fact that Father Schmidberger doesn't believe that the Holy Father will excommunicate the Society again. From our own perspective it seems clear that the Society can wait out the decadent elements of the hierarchy in Europe and America whose numbers and influence are fading quickly while the Society and confreres in "good standing" with the Church grow ever stronger by the month.  Time is definitely on the Society's side in these negotiations.

Of course, who knows what the Holy Father will do when he receives Bishop Fellay's response.


Benedict XVI wants that the Lefebvrists accept while only denouncing the particular formulations of the Catastrophe-Council.  Under this qualification they are  liable to be pilloried themselves. -kreuz.net


(kreuz.net) In a video interview for the site 'pius.info' Father Franz Schmidberger -- the German District Superior of the Society of St. Pius X --  have summarzied the qualifications which the Vatican has set forth for the "normalization" of the Society.

There won't be a second Society

The Society may be able to put the errors of the Second Vatican Council "in the pillory".

They will be able to use the old Missal exclusively.

And they requested a Vatican assurance that the Bishops of the Society will be chosen in the future from their ranks.

Query to the Pope

Father Schmidberger explained that the last version of the Dogmatic Preamble -- which the Vatican presented to the Society on the 13th of June --  was the proposed text he received.

It naturally had additions included, "which presented a problem for us".

Because of that the Society asked the Pope if this version was his or one of  his collaborators.

In his answer, the Pope assured them that the new requests were his own requests.

The Society may only discuss the nuances or one or some of the other formulations.

They still must be prepared to see the Pastoral Council in an unbroken line with the Dogmatic Councils.

Father Schmidberger's commentary:  "That doesn't work, naturally.  There are breaks, which are not to be denied."

He stressed that the Vatican would have to rescind these, if they wished to normalize the relations with the Society.

The current situation of the Society is "anormal".

Actually this situation -- which is pressing for a normalization -- is not the fault of the Society.

The discussions with Rome should have shown -- that the Society is seeking normalization and depend on the Pope.

The controversial Prefect of the Congregation for the Doctrine and the Faith, Archbishop Gerhard Ludwig Müller, was described by Father Schmidberger as not very "well disposed" to the Society.

He has favored an "almost hostile disposition" to the Society.

The new Vice President of the Commission "Ecclesia Dei", Archbishop Augustine DiNoia, is viewed by the District Superioor as a "balance" to the Head of the Congregation.

Why does Msgr Müller not sign the Dogmatic Preamble?

Father Schmidberger criticized the 'heterodox doctrine" of the Prefect for the Doctrine of the Faith.

He exchanged Transubstantiation with a theory of transfinalization, where the bread and wine in the Mass merely takes on a new quality.

He also doesn't possess a "very clear position" on the Virginity of Mary.

Such People Support the Pope

Finally, Father Schmidberger criticized the naming of Archbishop Arthur rooche as Secretary of the Congregation for Doctrine and the Faith.

Msgr Rche is a sharp opponent of the Motu Proprio 'Summoroum Pontificum'.

He had done everything in his Diocese in Leeds England to hinder the Old Mass.

The priests and bishops of the Society of Saint Pius X use absolute Truth and cold, hard clarity to mercilessly pummel the Modernist errors. I am forever in their debt.