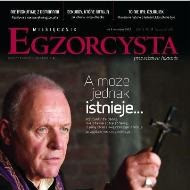 (Warsaw) In Poland, the world's first magazine was published on exorcism, which is at news stands. The monthly magazine titled Egzorcysta (Exorcist), whose first edition was printed in an edition of 15,000 copies, has 62 pages.

Some Polish Catholic priests were brought together by a publisher to launch the magazine project, according reports by the Agence France Presse. The magazine costs 10 zloty, which works out at approximately 2, 3 Euros. The headlines of the first edition are "Satan, a Reality" and "New Age, the Spiritual Vacuum". Poland currently has 120 priests who are officially appointed as exorcists, as the priest Aleksander Posacki, professor of philosophy and theology, a demonologist and exorcist, explained on Monday at a press conference, in which the magazine was presented.

15 years ago there were only four official exorcists in Poland, says Posacki. This large increase was put in context by the priest that has tried in one of the most Catholic countries in Europe to expel Godless Communism with turbo-capitalism after 1989. Capitalism creates a market of opportunities and with it the opportunity to make the occult shops.

Aleksander Posacki is a member of an international Exorcist Commission of the Catholic Church. At the press conference he pointed out the inability of the various schools of psychology and psychiatry to deal with the phenomenon of possession and Umsessenheit because conventional treatments do not help.

Another Exorcist and staff of the new journal, the priest Andryej Grefkowicz, said that there were so many requests that the waiting time in Warsaw amounts to three months. The priests work with psychiatrists to first rule out the possibility of a mental illness. "I always consult a psychiatrist, if I have doubts then we often come together to the conclusion that it is a mental illness and not a form of obsession," said Grefkowicz.

In contrast to swindlers or providers of occult practices who may even be the cause of an obsession, who are paid substantial amounts by gullible or desperate persons, there is the offer of help from the Church through prayer, confession, forgiveness, or by exorcism, which is completely free, say the two priests.
Link to Katholisches....