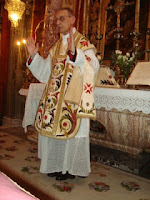 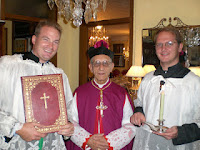 Edit: there isn't much we can add but only that it's fitting that he died so close to the birth of the legislation he did so much to bring about.  God grant him rest and pardon.  Let us not fail him in death who did so much as a shepherd of souls and always carried a generous heart and pray for the repose of his immortal soul.  Here's a slightly edited google translation from the wonderful, Messa in Latino:


We have just been informed by telephone that recently fell asleep in the Lord at the age of 80 years, after a period of illness, Monsignor Angelo Amodeo, minor canon of the Chapter of the Cathedral of Milan, was a great lover of Tradition Ambrosian Liturgy and Roman.

He was ordained in 1957 by Cardinal Montini of Milan, and was priest of great humility. He always wanted to come to the aid generously to all those who needed him, in different parts of Italy (Rome to Imperia, from Venice to Meda) to celebrate Mass in the ancient rite of the Church or to play the role of assistant priest. always remember with immense gratitude that Monsignor Amodeo its September 14, 2007, the day he came into force the long-awaited Motu Proprio " Summorum Pontificum "of the reigning Pope, took a long journey to Loreto to play the role of assistant priest at the Pontifical celebrated by Cardinal Dario Castrillon Hoyos in the Basilica (bottom) of the Holy House.

Hurry, expiate his human faults, his soul will be received into heaven to sing with the angels for divine liturgies.