Bishop Builds Cathedral of Our Lady of Fatima in Far East 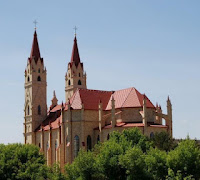 "Nothing is more important in society than the moral principles that form its foundation, nothing. Everything else is secondary"

It's in the back drop of Putin's great program of moral restoration of the country, that he's seeking to not only reinvent the Russian State's relationship to the Church, but is actually keeping his promises in contrast to what's happening further west, where the Church and its believers are increasingly falling under systematic and pervasive persecution. While others are buying outlandish space age designs and passing them off as worthy Catholic edifices, others are not only building in stone, but restoring the Faith. As if to underscore these hopeful circumstances, another restorationist is as work in his Diocese of Karaganda in Kazakhstan, Bishop Athanasius Schneider is, as if by miracle, building a Cathedral devoted to Our Lady of Fatima as we would say, in the ruins of the Soviet Imperium, as reported by Rorate Caeli:

What is the historical and spiritual meaning of the construction of this Cathedral at Karaganda?

Bp. Schneider: The first reason was this: to have a cathedral in a more dignified and visible place. Because the diocese of Karaganda used up to now a building that had still been built at the time of persecution, and this building is in the outskirts of the town and not exteriorly recognizable as a church.

A cathedral in a more central place, built in an unmistakeably Catholic tradition, that is, in the Neogothic style, will be a silent, yet also potent, sign and means of evangelization in a world in which Catholics are about 1% or 2% of the population, in which the majority of the inhabitants are Muslims, and where there is a strong Orthodox minority. Moreover, a considerable part of the population does not belong to any religion, they are people who search God.< br/>...

The historical and spiritual meaning also has this dimension: the new Cathedral is a sacred place for the remembrance of the countless victims of the Communist regime, since there was around Karaganda one of the largest and most terrible concentration camps - of the Gulag - in which people belonging to 100 different ethnicities suffered. At the same time, the new Cathedral will also be a shrine for prayer of expiation for the crimes of the Atheistic and Communist regime.

That's great news! Now all we need is for the Pope to consecrate "Russia" to the Immaculate Heart of Mary as requested by Our Lady of Fatima with all the bishops. http://www.fatima.org