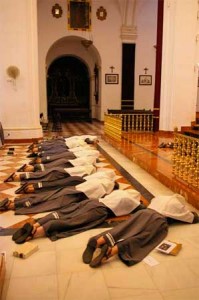 (Madrid) 15 Sisters of the Community of St. John have made their last vows on the last 29th June in the parish of La Rambla in Cordoba.  The solemn profession was on  the occasion of the 100th Birthday of Father Marie Dominique  Philippe who died in 2006, whom the sisters consider their founder. The sisters are from Austria, England, France and Spain, where many family members were on hand to celebrate and witness the festive occasion of life surrender and consecration to the Lord.
The Mass was celebrated by  the Bishop of Cordoba, Demetrio Fernandez.  Bishop celebrated in the presence of the Vicar General and the Rector of the Seminary of the Diocese. The sisters have settled recently in the Diocese of Cordoba. 25 sisters of the Community live in the monastery near Cordoba  and worldwide there are now 150 sisters who lead a contemplative life, but without examination. The female branch of the St. John's community was founded on 8 December of 1982 and has been recognized since 1994 as a diocesan congregation.
Unlike other religious communities  St. John's puts both the same emphasis of importance the habits of both their female and the male branches.
The male branch, which now has some 600 brethren, arose from a merger of theology students to the Dominican priest and professor at the University of Freiburg in Uechtland, Marie Dominique Philippe, which was formed in 1975 and is recognized canon law since 1987. The mother house is in Rimont in France. He now has offices throughout Asia, Africa, America and Europe. In Austria, the Priory Queen Mary in Marchegg and in Switzerland, the Priory of Saint Jean in Geneva. In the Netherlands and Belgium, there are both brothers and sister communities of the Congregation.
Text: Giuseppe Nardi
Image: Community of St. John
Link to katholisches....
Posted by Tancred at 10:27 PM

Thank you God for the rebirth of this beautiful order under Our Ladys protection. They are now called the Sisters of Mary the Morning Star.