Only One Donkey Scratches Another: Blasphemy in Bamberg Cathedral

(Bamber) "Asinus asinum fricat", (Only a donkey scratches another donkey) thus says old philology and journalist Francesco Colafemmina about the exhibition "Moderne Kunst in Dom" (Modern Art in the Cathedral)  in the romanesque Cathedral of Bamberg, to which no one took umbrage, as Colafemmina complained.  I the Frankish episcopal city, both curators Bernd Goldmann and Roland Baierl, the latter as project expert for the Archdiocese of Bamberg, invited 13 contemporary  artists,  to give 35 modern "interpretations" likewise in contrast to many different old artworks.  The special part of the exhibition is in the "opposing".  The Catalan Jaume Plensa set the enormous marble head "Awilda in Bamberg" against the "Bamberger Reiter".

Archbishop Ludwig Schick stated that the exhibition is an "invitation" to "review and to intensively inspect" the available art of the 1,000 year old Cathedral, but also "to observe" and "to evaluate" contemporary art.   With the exhibition, says the Archbishop, "one receives a sign", that "art is not at its end",  not even the "religious art".  After 2002 and 2004, this is the third exhibition of "modern art" in the Bamberg Cathedral.

In the Archdiocese, the canon Norbert Young, director of the Department of Art and Culture in the diocesan ordinariate is featured, who is responsible for the exhibition. Jung emphasized that the Cathedral is "not a museum" but "a testimony of the 21st Century living faith."

Doubts about the sincerity of this statement were harbored by the classical scholar and Catholic journalist Francesco Colafemmina, who offered an utterly sharp criticism of the exhibition. On the blog Fides et Forma , which deals mainly with religious art and architecture, among other things, he deplored the lack of reverence as Colafemmina says, for Saints, particularly in the House of God. "Usually, to prostitute the sacred places that have the new church of the 21st Century even German believers managed (there are only a few, to be honest) to convince them that the house of God can occasionally be transformed into a stronghold of the ridiculous and tasteless. "

It was "obvious" that "good taste and common sense" in certain places were no longer at home, said Colafemmina. The author of multiple books complains that the conflict between believing perception and of contemporary art "always the latter" would rule, because, says Colafemmina, in some Church circles a point of view prevails where the aesthetics of the Catholic is completely foreign to it and even confronted with hostility. 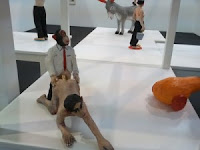 Colafemmina throws an example of the artist Volker März and represents those responsible for the Church with "hypocrisy". In the Bamberg Cathedral, a series of  März 's sculpture installations followed, figures riding on a donkey, a man standing on the shoulders of a woman, several dolls that hang with burning heads from the vaults of an aisle. It was "hypocritical," that the critics that have objected to the artists and curators in the Bamberg Cathedral at the exhibition of his sexist figures and installations, including the representation of a monkey in a sexual position with a woman. Colafemmina sees this as an expression of relativism. The fact that a cathedral would be misused as an exhibition space points to an indifference to the sacred, which can not be glossed over by "wordy empty phrases". Text: Giuseppe Nardi image: Wikicommons / Fides et forma
Posted by Tancred at 6:03 PM

If Hell had an art gallery, it would look like this.