The article says that the site was "Nestorian" Christian, but that doesn't mean that these people held Nestorian views. In any case, even Nestorians are preferable to Protestants.

A 2007 expansion of an airport in Najaf, Iraq exposed the remains of the earliest known Christian church in Iraq. Originally built some 1,700 years ago, the remains require proper excavation, but the wartime discovery coupled with a lack of funding has hindered scientific study. The ruins point to a thriving Christian community in early first millennium Iraq. Some scholars believe the site to be the Arab Christian center Hira, an important center of Nestorian Christianity for centuries. Christianity was spread by the Arab Christian Lakhmid dynasty, who made Hira their capital in 266 a.D. The discovery of the oldest known Christian site in Iraq is a reflection of Iraq’s rich and diverse cultural heritage in Iraq, and Iraqi archaeologists hope to conduct a proper excavation in the future. 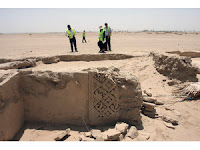 Fantastic! We don't know the story of the old church of Iraq but thank God because we have found it and realize that God is really great even a thousand years ago he is good until now. So let's worship Him!