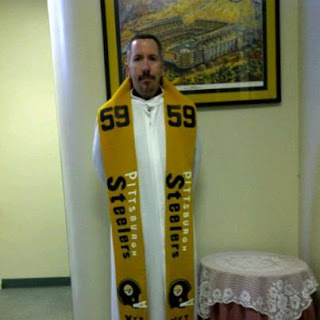 Edit: here's Father Dismas Sayre, who is the Parochial Vicar of the Hispanic Ministry for the Dominicans in California.  He's attired for football season in a stole with a professional football team on them.


Chris Gillibrand showed us a link where this man shows a penchant for Lifeteen Liturgy too,which is famous for Arizona's own sexual predator and Modernist Msgr Dale Fuschek.


What's the big deal, you ask? 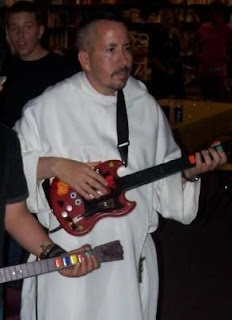 If you don't know what's wrong with this, a dictionary definition probably won't help, but perhaps you might object if he showed up wearing this for a relative's funeral.  Part of the definition of Sacrilege from New Advant's Catholic Encyclopedia as follows:

Sacrilege is in general the violation or injurious treatment of a sacred object. In a less proper sense any transgression against the virtue of religion would be a sacrilege.

Theologians are substantially agreed in regarding as sacred that and that only which by a public rite and by Divine orecclesiastical institution has been dedicated to the worship of God. The point is that the public authority must intervene; private initiative, no matter how ardent in devotion or praiseworthy in motive, does not suffice. Attributing a sacred characterto a thing is a juridical act, and as such is a function of the governing power of the Church.

It is customary to enumerate three kinds of sacrilege: personal, local, and real. St. Thomas teaches (Summa, II-II, Q., xcix) that a different sort of holiness attaches to persons, places, and things. Hence the irreverence offered to any one of them is specifically distinct from that which is exhibited to the others. Suarez (De Religione, tr. iii, 1-3) does not seem to think the division very logical, but accepts it as being in accord with the canons.
Posted by Tancred at 7:24 PM

Bad vestments I'll say. His taste is all in his mouth, as my mum used to say.

Profaning sacred vestments with sports insignias is bad enough but to use one whose team is owned by a "catholic" who supports abortion with his team proceeds is beyond the pale.

BTW...Pro-Lifers who passed out fliers at the games a few years ago called out to Rooney as he entered the stadium. They called "It's not too late! You can change! Convert before it is too late! Don't support abortion!" His response? "My bishop says I am okay." That was a direct quote told to me by one calling out to him. His bishop at the time would have been the now infamous Donald Wuerl.

Just seeing this now, so forgive the late response. I don't check here all that often.

1) I have never worn the Steelers vestment outside of the rectory of the priest who owns it. It was made by sports fans as a tribute for him for his love of the team.

2) The bottom picture is not at any kind of Mass. It is in the after-Mass program portion, in the Parish Hall classrooms. Those are not real guitars -- they are video game guitars for "Guitar Hero." This may be verified with any younger ones who love video games.

3)You may ask the brothers of my province of my "reputation" in matters liturgical. Yes, it's ok check with them. Some places I help out at call me "the Singing Priest" because I often chant the Sunday Mass. I also chant the Latin OF Mass where I currently reside on Sundays. I am as "Say the Black - Do the Red" as anyone, to the annoyance of some.

Which is part of the reason they might find 1) not really in my character.

4)I've worked a lot in Pro-Life ministries, being the chaplain of the pro-Life group at my last parish, participating in the 40 Days, etc. You can find a small mention of me at Intermountain Catholic online (by search), or check with LA Pregnancy Services.