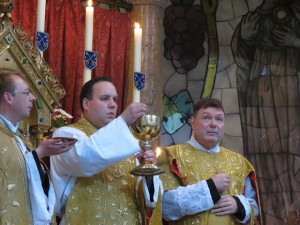 Email ThisBlogThis!Share to TwitterShare to FacebookShare to Pinterest
Labels: Immemorial Mass of All Ages, New Vocations

This is wonderful news. Hopefully this will result in grace to speak up for the Faith and fight the Modernist errors because it isn't just the Mass. They must also "Fight for Faith!"
That would be to fight for THE Faith, not the false faiths of heretics or Hinduism, Muhammudism, Buddhism, Paganism and other religions of Satan.

This is indeed wonderful. Over the past year or so I have seen a few other reports of good things being celebrated for and by Dutch Catholics in a country that five years ago had pretty much gone to the dogs.

Now we gotta get those Belgians in order.