The Fruits of Gaudium et Spes: What's Going on in the Vatican? 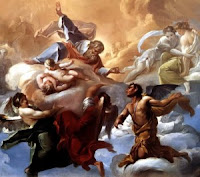 [katholisches, Roberto de Mattei] What's happening at the Vatican? The Catholics all over the world ask themselves, stunned by the sense of the messages that are springing up from the ground into the papers and seeming to reveal the impression of an internal church war which is raging within the Leonine walls, and which is inflated artificially by the media. If it is not easy to understand what happens, you can at least try to understand why all this happened.

The fact is not without significance that this self-discharge exactly on the 50th Anniversary of the Second Vatican Council made. Among all the documents of the Council, is a particularly emblematic and perhaps the most controversial, namely, the Constitution Gaudium et Spes, which the theologian Joseph Ratzinger did not like. In that document, with optimistic irenicism, the embrace between the Church and the modern world was celebrated. It was the world of the 60s, drenched in consumerism and secularism, a world on which lay the shadow of Communist imperialism, which the Council would not discuss.

The Second Vatican Council saw the positive seeds of modernity, but not their threats and refrained from denouncing the errors and refused to recognize its anti-Christian roots. It wanted to hear the world and tried to read the "Signs of the Times" in the conviction that history means a continuous, indefinite progress. The fathers seemed to be in a hurry to finish with the past, in the belief that the future would be beneficial to the Church and humanity. But that was unfortunately not the case. The vertical post-Conciliar momentum was replaced opposed to the transcendent principles by a chasing after the earthly and mundane values.

The philosophical principle of immanence was transformed into a horizontal and sociological point of view of Christianity, symbolized - in the liturgy - through the people's altar. The conversion to populum, the price has been paid in the unprecedented  destruction of the artistic, has transformed the image of the mystical body of Christ into that of a social body, the soul has been emptied of its supernatural. But if the Church of the supernatural and the transcendent turns Her back  to the immanent, it is to turn the teaching of the Gospel on its head, which should be "in the world but not of the world". It ceases to Christianize the world and is secularized instead of this.

The kingdom of God is thus predominantly a pure power structure in the political calculus and reason of human passions and minor interests. The "anthropological turn" brought much human presence in the Church, but left little divine. When we speak of the Church, we are referring, of course, not the Church itself but to the people who belong to Her. The Church has a divine nature, which may not be marred by anything and She will always be pure and untainted. Her human dimension but can be covered by that soot, which Benedict XVI. at the Via Crucis before his election described as "filth" and recalled Paul VI. in view of the Council's fissures and crevasses referring unconsciously to those prophetic words as "smoke of Satan", which has infiltrated into the house of God.

The smoke of Satan is behind the weaknesses and miseries of the people, especially the heretical speeches and ambiguous explanations or those modified since the Second Vatican Council, that would not have started the work that John Paul II called the "purification of memory", and which we call simply "conscience" in order to understand what we did wrong, what we have to correct, as we must reflect the will of Jesus Christ, the only savior is not only of his mystical body, but a company that drifts. The Church is going through a time of crisis, but is also rich in spiritual resources and holiness, that glow in many souls. The hour of darkness in the story is always accompanied by the hour of the light that comes on.

Roberto de Mattei was a Professor of Modern History at the University of Cassino, now a professor of Church history at the European University in Rome, he was adviser to the Italian government in foreign affairs, deputy chairman of the National Research Council (CNR) of the Republic of Italy, director and editor of the magazine Radici Cristiane and Catholic News Service Corrispondenza Romana, author of the Council's history: The Second Vatican Council - a Hitherto Unwritten History, Kirchliche Umschau Edition Church, for which he won in 2011 by the Italian historian Price Acqui Storia. [Nothing in English as we yet know]

From Katholisches...
Posted by Tancred at 11:19 PM