Bicennial of the death, on 20 May 1812 in Vienna, of the Count Jérôme Joseph François de Paule de Colloredo-Wallsee und Mels, Prince Archbishop of Salzburg from 1777 till the secularization of the Holy Roman Epire in 1803. Born on May 31st of 1832 he was titular prelate of Gurk in 1761. The Great Lord employed Leopold Mozart and his son Wolfgang Amadeus Mozart. With the latter, the Archbishop had many conflicts with the musiccian which eventually ended in the two parting. 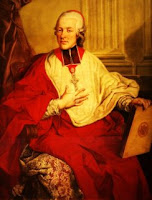 Email ThisBlogThis!Share to TwitterShare to FacebookShare to Pinterest
Labels: Great Princes of the Church