Today is Blessed Charlemagne the Great's Day of Birth 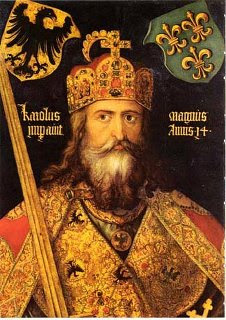 A friend just alerted me to this: From New Advent:

The name given by later generations to Charles, King of the Franks, first sovereign of the Christian Empire of the West; born 2 April, 742; died at Aachen, 28 January, 814. Note, however, that the place of his birth (whether Aachen or Liège) has never been fully ascertained, while the traditional date has been set one or more years later by recent writers; if Alcuin is to be interpreted literally the year should be 745. At the time of Charles' birth, his father, Pepin the Short, Mayor of the Palace, of the line of Arnulf, was, theoretically, only the first subject of Childeric III, the last Merovingian King of the Franks; but this modest title implied that real power, military, civil, and even ecclesiastical, of which Childeric's crown was only the symbol. It is not certain that Bertrada (or Bertha), the mother of Charlemagne, a daughter of Charibert, Count of Laon, was legally married to Pepin until some years later than either 742 or 745.