With the modern Clown-Bishops, anything goes:  "Is God an Ikea-Mainstream-Clown,  for whom  we can prepare a hot dog on this camping table?" 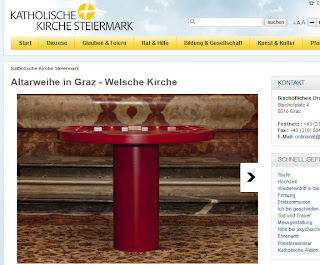 (kreuz.net)  On the 10th of April the Graz Auxiliary Bishop Franz Lackner (55) blessed a shiny red, single legged, Lego table in a so called Welsh church.

This was reported by Msgr Lackner himself on the self-promotion website, 'facebook.com'.

He published several photos of a Novus Ordo blessing ceremony.

The lego table has been set up in the late baroque church for Novus Ordo Masses.

The Auxiliary Bishop Lacker has celebrated disco Masses in the past and even "consecrated" pancakes.

Under the Rod of a Known Destroyer of Churches 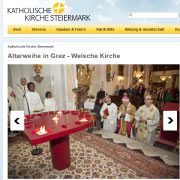 The Welsch Church is situated in the fifth city district of Graz.   The church is a baroque jewel from the 18th century.

"Welsch" means in this case, "Italian" and shows the ancestry of the builder.

The damaged Church belongs to the Graz parish of St. Andre.

Its pastor, Fr. Hermann Glettler, is a known destroyer of churches.

Where are the Beer Mugs?

The lego table has been severely criticized on 'facebook.com'.

One "Andrea Maria Cervenka" asked if "the red thing" is really an altar.

The furniture reminded her of a flat washing table with a tall stool.

On the table top there are visible indentations "Resi Rasers" as setting places for beer mugs.

"Hans Mohrmann" took a look at the pictures of the altar blessing.

It seems to be designed to discourage or make impossible ad orientem celebration or use of an altar cloth as is required by the GIRM. This seems to be a contemptuous mockery of the Faith. Things like this really bring home how bad it is in Europe. Jesus mercy