This example is a schoolbook case:  a brave Tyrolean priest has managed to drastically reduce sacrilegious communion in his parish.

The priest is a pastor of Ambras and also a Praemonstrantensian at Stift Wilten in Innsbruck.


At the distribution of Communion Father Busskamp reminded those present  that only people in a state of grace may receive Communion.

Whoever unworthily receives Holy Communion eats upon themselves condemnation according to the testimony of St. Paul.

The Pastor clearly explained that  the instances of adultery and missing Sunday Mass are hindrances to the reception of Communion.

It is a fact that from the celebration of First Communion on to national holidays there are various people who present themselves to take the Host as if they were picking up a dinner check.

The explanation of the dutiful priest did not remain without effect.

Because:  only the children presented themselves for First Communion and none of the adults.

Father Busskamp reported the joyful occasion by telephone to Ex-Reichsender (It's a descendent of the Nazi broadcaster in Vienna) ORF.

He didn't refuse Communion to anyone.

He did not let himself be led in the interview by Ex-Reichsender (ORF).

The Old Liberal Abbot Raimund Schreier of Wilten stabbed his brother in the back.

He bemoaned that none of the Godless participants went to Holy Communion.

Pharisaicaly he ascribed an "erroneous sensibility" to his colleague.

He is apparently "very clever",  to prevent the giving out of more dinner checks  at First Communion. 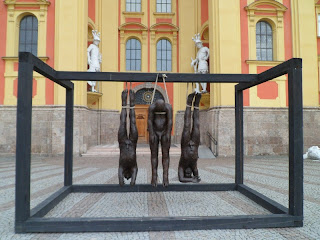