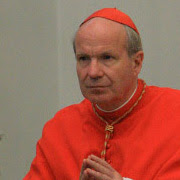 The clergyman stressed that he has a priestly conscience and respects divine and ecclesiastical law -- in opposition to the Viennese Porno-Cardinal.
(kreuz.net) Fr. Gerhard Swierzek has submitted his resignation as pastor of the community of Stutzenhofen in the Archdiocese of Vienna.
He submitted it -- according to reports from news agency 'APA' -- to the Viennese Cardinal Christoph Graf Schönborn.
The clergyman had tried to defend the Stutzenhofen Parish Counsel against the illegitimate election of a homosexual provacateur, Florian Stangl (26).
Fr. Swiezek will continue serving the other two communities.
The Cardinal Has to Travel
The clergyman explained that it makes him "saddened" that throughout the scandal, he was unable to have a meeting with Cardinal Schönborn.
Instead, the Porn Cardinal met with the shameless homosexual boy and his unreasonable Aids-infected partner and invited them to the table on the 24th of March, thus encouraging them in their mortal sin.
Now Father Swierzek hopes for a meeting with the Cardinal "after his trip abroad."
Honesty is the Best Policy
Fr. Swierzek explained that he couldn't remain active in a parish, whose members wanted their right at any price.
He has a priestly conscience and respects divine and ecclesiastical law -- as opposed to the Cardinal.
The clergyman referred to statements by Pope John Paul II and the 'Catechism of the Catholic Church' concerning homosexual immorality.
Living in sin is not considered to be the norm in a Catholic Church community.
It is much more the task of a priest to bring a sinner to penance.
Fr. Swierzek Swiezek is convinced that the people themselves want an honest priest.
Link to kreuz.net...
Posted by Tancred at 11:36 PM

This is so disturbing. How long must things of this nature go on??? Thanks for commenting on it.
-Faith