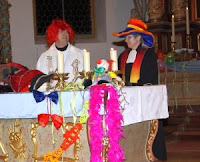 (Berlin) In the past years there have been celebrations of so-called "Faschings Liturgies" [Mardigras]  in various areas in the German speaking areas.

The Society of St. Pius X in Germany is appealing "with insistence" to "all priests" on Sunday before Ash Wednesday to forbid  "Faschings Liturgies".   The critics from the Society are concerned about "blatant abuses" , which have "slithered" into parishes.  "With the intention of offering church visitors diversions, many priests have begun to introduce Faschings elements into the Liturgy" and enter dressed as clowns at the altar.  "In many places there are Mardigras bands in the churches, where people link arms and sway back and forth, where Mardi Gras songs are sung and the sermon is a fool's speech," so says the German District of the Society.


The District Superior, Father Franz Schmidberger, stressed in his broadcast that he wasn't criticizing Carvinal, which bears a special expression of Catholicism.  The Carnival must in any case by separate from the Catholic Liturgy.  "Don't you have anything at home to eat and drink?",  cites the Society the Apostle Paul's 1st Letter to the Cornithians (11,22), in order to ask, if there are not community centers or party halls, in order to celebrate, to sway and give fool's speeches?


"The Mass is not some community celebration, rather it is the most mysterious, most holy presence of the Sacrifice of Christ on the Cross, made present by the Flesh and Blood of the Son of God on the Altar.  It's not the place for informal greetings, confetti and false noses!"


The Superior of the Society of St. Pius X in Germany recalled then, that "Faschings Liturgies" are as much against the "liturgical order of Tradition", as they are also "against the prescriptions of the Second Vatican Council".  In the Constitution Sacrosanctum Concilium of the Second Vatican Council, it says further: "The Holy Liturgy is above all a prayer to God" (SC 33) and:  "The regulation of the Liturgy only in accordance with the authority of the Church; and  indeed the Holy see in accordance with the law and the Bishop."  (SC 22 § 1)

The SSPX calls upon the priests in Germany, "to finish the disgrace of Carvinal Liturgies" and asks "the Bishops to defend the sanctity of the Sacrifice of the Mass again." Text: Giuseppe Nardi Image: Church Circle Paderborn.de Link to katholisches....
Posted by Tancred at 11:56 PM