Factions Fighting for Position in the Vatican 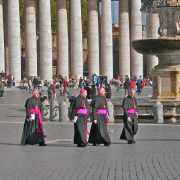 Edit: Considering how the Jesuit, Father Becker, was passed over for a Cardinal's hat, when he's clearly in good health, there's a lot going on at the Secretary of State. It seems that Cardinal Bertone is opposing some of the more conservative appointments, but then, it also seems as though the criticisms being leveled against him aren't very substantial either. It's also interesting in light of frantic reports in the Italian press about a supposed threat on the Pope's person.

It is not impossible that these Cardinals have a foreseeable future in the Congregation of Doctrine and the Faith.

(kreuz.net) On the 12th of January the journalist Franco Massimo reported about apparent factionalism in the Milan daily 'Corriere della Sera'.

There are two factions: the group of State Secretary Cardinal Bertone and his opponents.

Between the lines, Massimo ascertained that the opponents of the Secretary of State are to be found in the ranks of the Italian Bishops Conference.

There was  [?]  even a group of Cardinals who intend to draw up an anti-Bertone memorandum.

Massimo says that with the most recent increase in the Consistory of Cardinals -- 30 of 120 -- has generated a lot of frustration.

At the same time, the Italian Bishops' Conference and the Vatican agrees that the Italians will not be able to agree on a candidate at the next Papal election.

Thus, Massimo points out the lines of conflict.

The Confidence of the Secretary of State


Of the new Cardinals there are three followers of Secretary of State Bertone:

- Archbishop Domenico Calgano, the President of Apsa, which manages the assets of the Holy See.

- Archbishop Giuseppe Versaldi, the President of the Prefecture for Economic Affairs of the Holy See.

-Archbishop Giuseppe Bertello, the President of the Vatican Governorate.

Msgr Versalde had originally been Cardinal Bertoni's candidate for the Archdiocese of Turin.

Thus Msgr Versalde has been summoned to Rome, where he is to receive a Cardinal's hat before the current Archbishop of Turin.

In any case, the Secretary of State had no luck when the Patriarch of Venice, Angelo Cardinal Scola was named Archbishop of Milan.

According to Massimo's information, he is to have opposed this nomination.

The Charges Against Cardinal Bertone

The journalist explains that the Pope had not once succeeded in calming the conflict between the Bertone group and their opponents -- although he has publicly and privately called them to order.

Against Cardinal Bertone there are many -- often unspecific -- charges:

-Through the naming of new Cardinals his power base will -- in so far as a powerless Vatican generally allows -- grow further.

-He has made the Secretariat of State into a kind of Vice-Pope.

-He is one of the worst Secretaries of State, which the Vatican has ever had.

- He is indebted to provincialism and has reduced the international profile of the Catholic Church.

Cardinal Bertone is already 77 -- and consequently a Secretary of State on call for retirement.

Other than that, there is a Salesian of Cardinal rank, the Old Liberal Prefect of the Congregation for Causes of Saints, Cardinal Angelo Amato (72).

Like Cardinal Bertone, he is a former Secretary of the Congregation of Doctrine and the Faith.
It is not to be ruled out that Cardinal Amato could could return to there as Prefect.
Posted by Tancred at 10:37 PM

It is interesting to look back and to evaluate the political environment at that day and time. This is 2012 and just before the abdication of Pope Benedict. Pope Francis was elected in 2013.----Cardinal Bertone is extremely controversial in his own right. He wrote a book on the Third Secret in which he obviously falsified and left out key events. Well placed rumors are very specific on why he did so. He was part of the lobby which obstructed Pope John Paul II.---Since the election of Pope Francis, this lobby has crawled out and begun sunning itself on the warm rocks at the height of the noon hour. ----What hold did he have over Pope Benedict? Many times, the Secretary of State is an early front runner for pope. The truth is on the verge of being spoken on why Pope Benedict abdicated. Pope Francis was the runner up in the previous election. There was a deal concocted and Francis walked right into the conference room and took over the castle.