The bell in the Catholic Church of St. Mary's in Dubai was founded by the then ruler, Sheikh Rashid Bin Said Al Maktoum.  by Abdullah Leonard Borek. 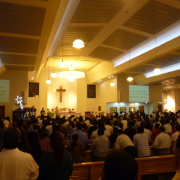 (kreuz.net)  The United Arab Emirates is a land with five million inhabitants on the easterly coast of the Arab peninsula.

To better understand the situation this land finds itself it should be known that about eighty percent of the people living in the country aren't native.

They come from India, Pakistan, Bangladesh, Sri Lanka and the Philippines.

From those who come from these lands, the majority living there are Christians.  There are no native Christians.

There are no Church domes


In the United Arab Emirates, as also in other Gulf states, Christians and other religious minorities can practice their religion unhindered.

The State  permits the teaching of the Christian religion in areas determined by law, in so far as they do not interfere with public interest or offend morality.

There are limitations respective of the public display of religious symbols

Otherwise churches may not have copper domes, mostly to exclude them from being compared to Mosques.


On the other hand, church communities  thoroughly enjoy the good will of the state.

This is shown for example in the properties put made available for church construction.

The bells of the Catholic Church of St. Mary in Dubai was founded in 1966 by the then ruder, Sheikh Rashid Bin Said Al Maktoum.

The Christians -- especially those from ethnically defined churches -- are generally not so well off as guest workers from the Indian subcontinent.

It is the case that these communities are not very often capable of the financial means to build their own churches.

They arrange things with established communities,  who posse their own churches.