Edit: he's trying to reform his Diocese, but the professional Catholics won't let him. He turns to Christ.

He has discovered the Middle of the Council
The Bishop of Chur brings Old Liberal error to the point: "It is my certain conviction that structural debates will never develop a living Church." 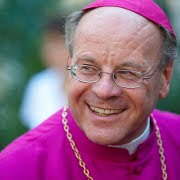 Just as princes give their sovereign responsibilities to their deputies and these deputies do the same in turn, so the Bishops yield their duties of prayer to the simple people out of modesty.


These duties were spread further -- till they finally, as in the Carthusian lands, "where all piety is as in the grave."

Then comes the Second Vatican Council -- you might ask if he were serious -- which encourages all Catholics to a "renewed and missionary Christianity".

The Bishop cited the Dogmatic Constitution of the Church "Lumen Gentium".

The Old Liberals desire structures instead of life

It is surprising to Msgr Huonder that since the Council there had been much debate over ecclesiastical structure and classes.

This had contributed to "the Church, in its meaning and determination in the minds of many people to be relegated to the background in favor of human or very often at all-too-human aspects."

The bishop is firmly convinced "that structural debates will never produce a living Church."

Msgr Huonder gives an exegesis of the Constitution of the Church, which he understands in a double framework:

- The first chapter speaks of the Church, in which the Trinity opens Itself to men. In the eighth chapter this community finds its personal completion in Mary.

-The second chapter speaks of the people of God. This expression mirrors the seventh chapter in the eschatological character of the Church.

Within this framework the Council mentions in the third, fourth and sixth chapters the ecclesiastical classes: clergy, laity and religious.

This chapter is concerned with a "general appeal to the holiness in the Church".

All have the same duty

It reads in the lines about the Church in the chapter on "Lumen Gentium":

"The Church exists so that all may belong to the hierarchy or led by her, to be called to holiness."

Therefore the Second Vatican Council is an answer to the temptation, to pass by the quest for perfection.

"So I am convinced that the heart of the mission of the Second Vatican Council also in our present situation a medicine for some suffering, within and for the Church, as indeed it is articulated again and again."

He wants the Church -- with a quote from John Paul II -- not of reformers, but of saints.
Link to original...