This Italian Nativity is a Leftist Obsession: Blasphemy 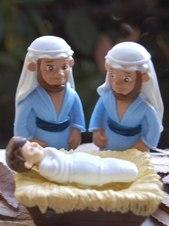 (Bergamo, Italy) In the so-called social center Paci'Paciana of the extreme-left scene in the north Italian city of Bergamo, a "provocative" creche has been set up. Mary is missing in it and instead, there are two "Josefs" at the crib. Both homosexuals are overjoyed over the child in the crib, which apparently -- in the absence of biological reproductive conditions -- has fallen from heaven by stork.

The blasphemous creche affords the left-extremists a rationale: The "Holy Family" is a "civil union", which was formed by "artificial insemination with a surrogate mother".  In addition, there is a list of charges about alleged "discrimination" against homosexuals.  The old champions of "civil disobedience", "defenders of the weak and oppressed", Trotskeyites, Maoists, Chavists, antagonists, of correct speech, and more recently "the indigenous", those who would prefer to act as a posse chasing dissidents and  thugs, should not lead one to expect much.

It would be futile to explain to them that Mary and Joseph were married regularly in a synagogue according to Jewish Law.  But why hold close to the historical truth when one's imagination is so much more fruitful, when the "eternal wrath" in the "struggle against the system" is so obliging.

The left has thrown the only woman out of the scene, where the ox and ass are next to the Nativity with "twins" made of plastic (Josef + Joseph), all a strictly male cast to be sure.   This is a gross violation of another progressive favorite theme:  feminism was trampled underfoot by the autonomous communities.  However, it must be added that women never amounted to much in the club milieu of the left-wing scene.  Joschka Fischer is expected to know something about it.  Correspondingly, the "alternative"cradle is an expression of left-wing extremist male dominance and lust for power: gay Joseph, shepherds, the Magi, the boy in the manger, the ox and ass.  Perhaps there is also a pedophile subtext to the scene as well?  Perhaps it is Daniel Cohn-Bendit who can provide an aid to interpret this?

The only female in the manger is the gender for the word "manger" in Italian, perhaps.  The pot from which one eats, but that is also "holy" in this scene.  Probably the only thing that really is sacred.  Finally, can you look to the friendly city and state governments to put you up and feed you for a short while -- how short is the memory --  for the "blessings" of the eastern worker's "and peasants" paradise, especially to be sustained  in the now defunct German Democratic Republic, to give in return for the "anti-Imperialist struggle" and other subversive activities.

What the child in the Manger concerns, which is also found in the left-wing "social center",  is the God become man in the form of a child, it is shown, that even the left-extremists could not get past Him:  One loves the child Jesus or hates Him.  He can not be eluded.  For people, who are of good will, his appearance is an inner peace of self-giving security.  For all others he becomes an obsession.  As He already knew and foretold.

Email ThisBlogThis!Share to TwitterShare to FacebookShare to Pinterest
Labels: Demoraliziation