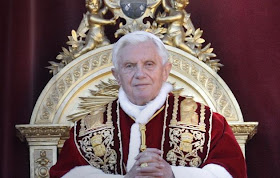 Pope Benedict XVI delivers the Urbi et Orbi (to the city and to the world) Christmas Day message from the central balcony of St. Peter's Basilica in Vatican City, on December 25, 2011. In his traditional Christmas Day message, Pope Benedict XVI urged the faithful to seek a "spiritual union" with the less fortunate around the world. UPI/Stefano Spaziani


VATICAN CITY, Jan. 27 (UPI) -- Pope Benedict XVI said Friday at the Vatican the world faces a crisis of faith and warned against indifference to doctrine in the name of religious unity. "Today we see a number of good results caused by ecumenical dialogue, but we must also recognize that the risk of a false Irenism and indifference, quite alien to the mind of Vatican II, demands our vigilance," the spiritual leader of the world's Roman Catholics said Friday at a meeting of the Congregation for the Doctrine of the Faith. Irenism was an ideology conceived by Dutch theologian Erasmus that sought to mediate differences between Protestants and Catholics, the Italian news agency ANSA said.

Edit: A few may remember the words of Dietrich Hildebrand on False Irenicism.  It's clear that the Holy Father does.

"False irenicism is motivated by a misconceived charity at the service of a meaningless unity. It places unity above truth. Having severed the essential link between charity and defense of the truth, irenicism is more concerned with reaching a unity with all men than with leading them to Christ and His eternal truth. It ignores the fact that real unity can be reached only in truth. Our Lord’s prayer ‘that they may be one’ implies being one in Him and must not be separated from His words in John: ‘And other sheep I have that are not of this fold. Them also I must bring and they shall hear my voice. And there shall be one fold and one shepherd.’"