The Courageous Prelate Georg Was A Prime Candidate for Cardinal

It's a lot more probable that a politically correct German would receive the frayed honor of Cardinal.

(kreuz.net) Prelate Georg May (85)is a courageous Catholic theologians and Apostolic Pronotary. 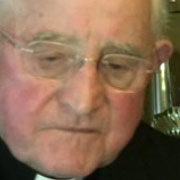 He was the Ordinary for Canon Law, Civil law and ecclesiastical legal history at the University of Mainz.

A Priest of Breslau

He was born in the lower Sileisian city of Liegnitz, which finds itself since the Societ-Allied Potsdam Conference under temporary Polish control.

After the war he studied Philosophy and Theology.

On the 1st of April 1951 he received holy orders from Bischof Heinrich Wienken (+1961) of Meissen.

He was ordained for the Archdiocese of Breslau and is incardinated there.

He held the chair for Canon Law, Civil Law and ecclesiastical legal history from 1960 to 1994.

A courageous Confessor and Prophet

Prelate May was very active publishing.

He published many canonical, and even works on ecclesiastical, Liturgical works and Church history.

He resides in his teaching activity at the University of Mainz in Budenheim near Mainz. In the year 2011 was named by Pope Benedict XVI as Apostolic Pronotary.

Even in retirement he continues to publish.

Among his non-canonical works he desired especially to write a book about the Catholic Church in the Third Reich.

He is also known as an academic defender of the Old Mass.

He is the more probable candidate


Roman observers think, among other things, that it is much more likely that the German Jesuit Father Josef Becker (84) will be named to Cardinal.

Since September 1977, he has been an adviser of the Congregation for the Doctrine of the Faith.

He teaches Dogmatic at the Papal University of the Gregorian and was known for his outspoken but dry manner.

Father Becker was a member of the Vatican delegation which met with the Society of St. Pius X.

Email ThisBlogThis!Share to TwitterShare to FacebookShare to Pinterest
Labels: Consistorium