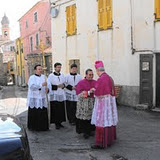 Edit: it's not possible to "concelebrate" in the Immemorial Rite of All Ages, but the local Bishop is concerned about that of all things. It appears as though there is conflict in the community. It's not clear whether this is being perceived from the outside by the Bishop or whether this actually exists in the manner of Protocol 1411 more than a decade ago when a few irresponsible and dishonest seminarians wrote a letter slandering the Fraternity of St. Peter and asking to say the Novus Ordo. This precipitated the dissmisal of the superior and the insistence that FSSP priests be permitted to say the New Mass.

This unfortunate maneuver was widely regarded as proof by others that Rome couldn't be trusted to keep its word.

Now apparently, the local ordinary here is interested in bringing a similar degree of Liturgical uniformity on the newly founded Benedictine Monastery of the Immaculate.

The following is a letter addressed to the local ordinary of Albenga-Imperia and addresses the points as to why these Benedictines won't be saying the New Mass, and how they have the canonical right not to do so.

To His Excellency,
Monsignor Mario OLIVERI
Bishop of Albenga-Imperia

Thank you with all my heart for having phoned me yesterday and for having told me very simply your thought about the problem of concelebrations that divides our communauty. Our conversation suggested me a few thoughts of which I would like to open my heart to your Excellency.
[…]
Strictly looking at the Code of Canon Law, canon #902 lets to hear that the general rule in the Holy Church is the individual celebration of the mass and that the concelebration is only allowed (sacerdotes Eucharistiam concelebrare possunt), that the concelebration is even sometimes forbidden and that, in all the cases, freedom stands for each priest to celebrate individually. So it would be unjust to put a strain on each priest and on each community for not concelebrating.

If our community built itself around the exclusively traditional rite, it was therefore its right and moreover Church admitted it as such through its Constitutions. After having attentively read those Constitutions, my former professor at the University of Law of the Opus Dei, Antoni Bishop Stankiewicz, presently dean of the Roman Rota, gave me in June 2006 a full confirmation of it.The Proper Law (lex propria) of the diverse Institutes is not a territorial law, leading to think for example that the traditional rite of the mass is an obligation only inside the abbey. The comment of the Code by the University of Salamanca on the contrary explains, about the Can. #13, that “some laws affect directly people whom they are intended to, not because of their link with a territory, but for a motive that touch them more personally, so that these laws follow the people who are subjected to them everywhere they go”. So our proper law obliges us, even outside the monastery.

It is obvious that this Community choice, canonised by the Church, is based on a conviction of faith, that hierarchy did not always include and even less accepted. Linked “collectively” to ecclesiastic institutions in crisis, the bishops, too often impregnated with the mind of the world and with its ideologies, were only paralysing the supernatural life in souls. After forty years of such a regime, its dramatic consequences have spread out sadly under our eyes. And those who among the bishops admit the above and deplore it, do not always succeed in reacting with the necessary means and vigour.

Our attachment to the traditional rite is a wedding of faith and love that, in the image of the conjugal union, obliges us to an exclusive fidelity. It supposes and shows a theology and a pastoral that cannot match with a liturgy which turn the back on The Lord for the dialogue and “the being together”.

Cardinal Ratzinger had already noted (in La mia vita, ed. San Paolo, Roma, 1997) the “very grievous damage inflicted on the faith by the liturgical reform”. The denunciation and unmasking of the modernist taboo of being “in conformity with the spirit of the Council” is gradually opening people’s minds, allowing increasing numbers of thelogians and of the clergy to recognize publicly the deficiencies and the doctrinal ambiguity of N.O.M. And, as noted by John-Paul II, in Ecclesia de Eucharistia, n ° 10, “The Eucharist is too great a gift to tolerate any lessening or any ambiguity”.

Such is the drama which saw a traditional reaction: while wishing to conserve the Ecclesiastical hierarchy wanted by our Lord, it refuses to make friends with a ritual in which, although valid and lawful, it does not admit the authentic expression of faith without ambiguity. Cardinal Ratzinger was entirely aware of this when he wrote in his autobiography: “I am persuaded that the crisis of the Church which we are living today is widely based on the disintegration of liturgy”. Is not this the fundamental reason for which the pope himself desires to reform the liturgical reform bringing it back into line with the traditional Mass?

It is true that this serious fault of the current liturgy, even when it is celebrated with the necessary dignity, is not always and easily observable to theological minds because the language of liturgy is not that of doctrine. The latter handles interior concepts, the former exterior signs. Doctrine speaks intelligence, whereas liturgy speaks to the whole human being, body and soul. Liturgy, said Péguy, is “stretched-out” theology. If liturgy is the work of the faith of our Fathers, it is as a result not only its expression but also its guardian. Anything which shocks the traditional liturgical sensibility is, to say the least, to be considered dubious. To give one example: the altars where the priest has his back to the tabernacle are an affront to the traditional liturgical instinct. I know of only one bishop — and this honour goes to you, Monsignor — who has requested his priests to remove this table from in front of the altar. [Liturgical direction indeed means that the worship which we return is first for honour and glory of God and not autocelebration of the assembly which, has talks oblige, require to move the crucifix on the quoting; in the centre, he would be too embarrassing.] This sacred liturgy which has been handed down to us, part of the 2000 year-old tradition of the Church, is Opus Dei and not opus hominum, a liturgy, as Cardinal Ratzinger writes, coming from God and not something “manufactured”.

The traditional mentality, while admitting the canonical validity and legality of N.O.M., does not find in such a liturgy the plenary expression of its faith. Such is the deep reason of its distance in relation to that liturgy and of its instinctive refusal to use it. The concelebration, at Mass, which is neither a legal obligation nor a theological necessity, would not shock the traditional mentality as such. In our epoch, when people feel “together”, concelebration certainly expresses a fraternal link between priests which is a sign of ecclesial communion. What casts down the traditional mentality is more the rite than concelebration as such. If one must concelebrate, then one much prefers the older and traditional manner of doing it, with deacon, sub-deacon, acolytes etc., expressive of a “hierarchical” communion more in accordance with a sane ecclesiology than is the “egalitarian” communion which arose with the liturgical reform and which bears the heavy imprint of the democratic mentality of our day.

Dom Gérard, our founder, as Dom Guéranger by liturgical idea, wrote in one of his many works on this subject : “The Church, Wife and mystical Body of Christ, is the most manifold, most structured society, most organised into a hierarchy which exists: of the summit up to the base, everything carries in her the footprint of a sacred hierarchy emanated from its exhilarating centre. This celestial Church composed of angels and elected representatives whom our primitive painters represented the wide open eyes, reached hands and lined up by order around the Lamb, since the big Seraphs up to souls of the Purgatory which go up to set up among the countless choruses, it is it which is our true fatherland and while seeing it beginning to take shape under our eyes, we trains as eternity.” (La Sainte Liturgie, éd. Sainte-Madeleine, p. 59-60, Le Barroux, 1982.)

Please excuse, Monsignor, the frankness of the above comments which to be sure call for further nuances. My chief motive in writting this letter has been the desire for complete openness vis-à-vis your Excellency. I trust that any possible and legitimate differences of opinion, will not cast a shadow on our future collaboration, and that you will grant me a place in your diocese where, in union with the Pope, yourself and all the episcopal collegiate, I can help, through my filial obedience, prayer and example, in your apostolate. If for the time being you cannot provide a place where I can settle, alone or with one or two confrères, perhaps at least you could give me your agreement in principle to receive me in your dicocese? We could then look together for some practical solution, with the help of several of your diocesan priests who have shown great willingness to have a monastic presence and witness in their vicinity. I would never be abble to thank you enough for allowing me to pursue my Benedictine vocation in reacquired peace.

Let me end, Excellency and dear Monsignor, by expressing once again my filial and respectful good wishes, in Jesus and Mary.

If our community built itself around the exclusively traditional rite, it was therefore its right and moreover Church admitted it as such through its Constitutions. After having attentively read those Constitutions, my former professor at the University of Law of the Opus Dei, Antoni Bishop Stankiewicz, presently dean of the Roman Rota, gave me in June 2006 a full confirmation of it. christmas flowers china