Plans to Destroy Basilica in Italy Meet with Resistance 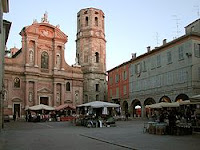 Edit: It's not as if the laity are complaining. Who cares about them? Yet when the local Bishop is "attacked" in a full length book by a famous architect, Stephen Maccarini, and the local arts and academic community, that's another matter.

The northern Italian city of Reggio Emilia boasts a magnificent Basilica of St. Prospero, completed in the 10th Century which has undergone many felicitous transformations. Now the local Bishop wants to create an altar nave, have benches that don't facilitate kneeling and include an ugly Japanese cross commissioned by a Shinto practitioner, that doesn't even look like a cross.

Usually, almost no one complains except the laity, but this time a great architect has taken up the cross and has excited the concern and indignation of the local Bishop who has sent his mouthpiece, Don Landini, to address the book which Architect Stephen Maccarini has written to denounce the planned wreckovation. As usual with Old Liberals, the Bishop's mouthpiece doesn't directly address the arguments, although he welcomes some alterations in the proposed plans based on the esteemed intellectual's recommendations, but focuses rather on the mistaken assumption that the architect's legitimate concerns are an attack on the person of the Bishop.

For additional photos, you can go here...

There's also another wreckovation in Wurzburg which is simply criminal that was covered by Rorate Caeli who picked it up from Europe's most popular religious site, kreuz.net.
Posted by Tancred at 11:07 AM