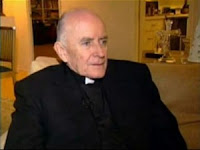 Edit: Andrew Greeley, who says he knows the identity of the infamous Chicago Boy's Club pederast ring is still recovering from an "accident." Matt Abbot's been covering the story from Chicago for almost a decade:

[Renew America] Thomas R. Hampson, an Illinois licensed private investigator and founder of the Truth Alliance Foundation, is determined to expose corruption — in the church and in society at large.

"It's clear to me that the crime problem has expanded as our collective values and character have deteriorated," says Hampson. "We need to address that core problem, and the church — defined as the people of God, not the institution or denomination — needs to take the lead. The first challenge is to clean up our own house."

Hampson knows it will be a daunting task, but he's ready, willing and able. His résumé is impressive: In the 1960s he worked for the U.S. Air Force Security Service as an intelligence analyst. In the 1970s and early 1980s he worked for the Illinois Legislative Investigating Commission as a chief investigator. From 1983 to 2004 he served as president of Search International, Inc., a company he established as an international investigation and security agency.