Cardinal Schönborn: "Feminist Theology is Good For the Church"

The oustered Catholic Bishop Kurt Krenn of Saint Polten sent the former Old Liberal director of the Pastoral Office of the Archdiocese of Vienna packing with good reason. 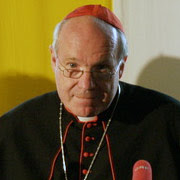 (kreuz.net, Wien) Apparently, Jesus Christ and the Apostle Paul argue against the law in cases where the law leads to self-righteousness.

The sacked Old Liberal Pastoral Administratrix of the Archdiocese of Vienna and Feminist Ideologue, Veronika Prüller-Jagenteufel, is appearing for the former 'Reichsender Vienna', aka (ORF). [Reichsender was the old Nazi radio station.]

Mrs Prüller-Jagenteufe responded tin the broadcase to the Old Liberal "Pastor's Initiative' and the theme "obedience".

Mrs. Prüller-Jagenteufel didn't offer any evidence for her theory.

Mrs Prüller-Jagenteufel complained about a "turning point" in her life.

After her theology studies, she worked under Bishop Krenn(75)who'd been forced into retirement in 2004 for the Archdiocese of St. Polten.

After a year and a half, she was thrown out by the Bishop.


Mrs. Prüller-Jagenteufel admitted openly that the reason was: "because the [Catholic] line, which Bishop Krenn was a party to, and my [Old Liberal] Theological attachment did not go together."

She had to "depart from the job".

Thanks to Old Liberal connections Mrs. Prüller-Jagenteufel got a new job immediately.

The rumored Vienna Pastoral-Ideologue Fr. Paul Micheal Zulehner received her with open arms as an assistant for his Institute.

Prüller-Jagenteufel belonged for a long time as "a fringe participant of even feminist groups".

She had contacts to many feminist sects which "had little or nothing to do with the Church".

The Cardinal Was Understanding

As Cardinal Christoph Schönborn asked her, if she would like to take over Vienna's Pastoral office, she agreed after giving a very long preamble:

"I am by my fundamental orientation and till now, a feminist Theologian."

Frau Prüller-Jagenteufel asked if that would work if the Cardinal were conscious of it.

Cardinal Schönborn "smirked" and answered: "This impulse will do us some good in the Church".

The Prince of the Church has expressed that there is supposed to be this alleged "diversity of opinions" in the Archdiocse's leadership.

As far as women's ordination, the Pastoral Administratrix didn't want to give the former "Reichsender" a concrete answer.

That isn't the most important question for her.

And as of now, 6:12 p.m., Central Standard time, on October 12, 2011, Mr Schonborn is still a Cardinal, still undisciplined, still leading countless souls away from the Faith (and into damnation), still a friend of the Pope (apparently), still an arrogant, soulless bureaucrat, still doing nothing while his diocese collapses, and is still in good standing with the Church.

Looking back from the perspective of hindsight, this previous comment asks a valid question. Francis did not become pontiff until March of 2013. That means that Benedict tolerated and evidently supported this individual's bizarre view of the Gospel. ----It is looking more and more that Pope Benedict was a lot more liberal than is assumed by many. It is known that he believed in the philosophy of Teilhard de Chardin and by association the coming papacy of Francis. As time goes on, the smoke is clearing in the move toward apostasy as charged in the writings of Malachi Martin.