Austrian Priests Call for Obedience to the Hierarchy

The Disobedience Faction has met its match: An Austrian Initiative is making its solidarity not with fallen Priests, who have betrayed their office, but with those Clergy, who serve truly in the vinyard. 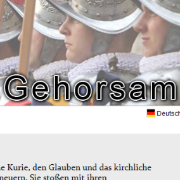 (kreuz.net) A few days ago the reform project "Call to Obedience" made its way into the public.

The project includes both clerics and laity.

The call understands itself as an answer to the Old Liberal "Call to Disobedience".

Its goal is to oppose the further leveling of the Church by Old Liberals.

That's part of the reason why the "Call to Disobedience" is being defended by hook and crook by the Church hostile media bosses. [They want to undermine the hierarchy and its authority]

The intiator of the "Call to Obedience" is Father Markus Doppelbauer (31) hailing from Austria.

He is a priest of the Archdiocese of Vaduz and a collaborator with the Catholic video-website 'gloria.tv'.

His "Call to Holiness" consists, in that it is similar to the Disobedience Pamphlet, in an introduction and seven announcements.

Old Liberal Resistance to the Reforms

In the introduction is the good-willed explanation, that the Pope and the Roman Curia has expended great effort to renew ecclesiastical life in the decadent nations of the West.

Actually: "They meet with much resistance to those proposals for reform."

The "Call to Obedience" asks for the support of the Pope and his collaborators for that very reason.

Freedom of Speech to Lie?

The "Call to Obedience" understands itself as the direct antithesis to the rebellion of the Austrian secular priests.

In their rebel document, for example, is the first point: "We will speak about a petition  for Church reform in the future in every divine service. We take the Bible seriously: Ask and you will receive. Freedom of speech means something before God."

The "Call to Obedience" offers: "We will speak of offering in future divine services and in personal prayer, a request for authentic reform of the Church."

This reform should work against the present lassitude and renew the fire of the Holy Ghost and the devotion of the Church:

"We take the Scriptures seriously:  Ask, and you will receive."

Before God, the "freedom of speech, which speaks the truth" is valued.

Holy Communion For Every Tom, Dick and Harry

The disobedient plead for the distribution of Holy Communion to every Tom, Dick and Harry.  "Call to Obedience" is completely against this:

"We will endeavor that the Faithful of good will are carefully prepared for the reception of Holy Communion."

Without the reception of Communion being only an exterior and empty gesture: "Nothing good can be expected of one who is not prepared to receive Holy Communion."

Against the "priestless Eucharistic celebrations" proposed by the disobedent ones, the "Call to Obedience" is offering flexible parishes which are open to their neighborhoods:

"That is a visible expression, therefore, that the Church is greater than my small community."

The Old Liberal demand for qualifications and training for lay ministers is counteracted by the "Call to Obedience" with the expression:

"We will show great appreciation for office of the Priest, the work of catechists and theologically educated Laity."

But: "The word of God can only be credibly preached, when the laity work together with the priest, and not against them."

"We don't Need any More Carreerists"

The "Call to Obedience" rejects the Old Liberal call for new ecclesiastical offices:

"We are going to firmly insist that no new hierarchical levels and presiders will be introduced with their own titles and conceits into the Parish."

Because:  "We don't need any more careerists, rather pious collaboration which serves the Gospel and not self-gratification.

The "Call to Obedience" will not be diverted from the Church's mission by discussions of ecclesiastical politics and career dreams.

Solidarity with the Truth

The Old Liberal "Call to Disobedience" ends with a homage of the fallen priests, who have betrayed their office and their Church.

One the other hand, the "Call to Obedience" declared:

We see ourselves as being in solidarity with priests who are trying to remain true to their office and  who work against contrary winds in their work.

As of present counting the Call has 1632  signatures, of which there are about 150 priests, deacons and religious.

That's good news. You'd think the people must be thinking about 1938 when the Nazi Anschluss happened. Lots of Austrian officials quickly declared themselves to be Nazis. 7 years later, if they weren't dead, they surely regretted it.

Pray for the "Call to Obedience." We could use one in this country.