Chi-coms Continue to Attack the Catholic Church in China

Edit: why not, they're doing it everywhere else. It might have something to do with the Vatican's recent excommunication of those participating in an unauthorized consecration of Bishops chosen by the Communist Government.

This is a very bad case of lay investiture and some things, at least, never change. If Catholic Princes could be hostile to the Church, why should Atheistic governments like China's be any different? 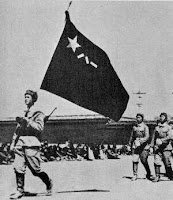 The United Front wants to prevent the election of a bishop who from the underground community. Three underground apostolic administrators are under police control. The Church of Tianshui launches a campaign of prayer for the liberation of their priests and faithful.

Beijing (AsiaNews) - A group of priests and laity from the underground community of Tianshui (Gansu) were arrested by the security forces last weekend. Among them are the administrator of the underground diocese, Fr. John Baptist Wang Ruohan; retired Bishop Casmir Wang Milu; Father John Wang Ruowang; as well as several other priests and dozens of parish lay leaders. Bishop Wang and the two fathers Wang are brothers. They are being held in different places and subjected to political sessions.

So far, the underground diocese of Tianshui had maintained a comfortable relationship with the police and government authorities. The two communities, the official and underground, have a total of 20 thousand faithful and 27 priests, 15 of which belong to the underground community. In 2003, Msgr. Wang Milu retired and the official bishop, Msgr. Jinglong Augustine Zhao died in 2004. The official administrator of the diocese is Fr. Zhao Jianzhang Woods, nephew of Bishop. Zhao. He was also nominated to become bishop.

Email ThisBlogThis!Share to TwitterShare to FacebookShare to Pinterest
Labels: Communism is Dead