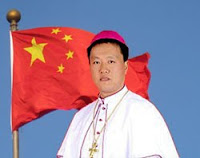 (Vatikan/Peking) At the request of numerous Chinese Faithful, and above all the Catholic underground Church, the Holy See has published a clarification that the unauthorized newly consecrated, regime-friendly Bishops of the People's Republic of China, as well as the Bishops who consecrated them, are excommunicated with all of the consequences that follow from that.

The explanation comes from the Papal Adviser for Legislative Texts.
The Holy See is pleading with the stricken Bishops:

-to make a public gesture of penitence

-that they do not celebrate Holy Mass or receive Holy Communion

-that they neither receive nor distribute the Sacraments

-that they give up the direction of their Dicoese.

These requirements are the "necessary medicine for healing", to make possible the resettling of the Catholic Church. After the receiving many uncustomary outcries, the Holy See has taken steps with this warning to clarify the confusing situation in the People's Republic of China. The Papal Adviser for Legislative Texts explained the reason for the proceedings as the illegal consecration by the Communist regime's Bishops without a Papal Mandate. Even though the punishment is affecting the relevant parties, there is still the possibility for the ecclesiastical punishments to be withdrawn and return to reconciliation with the Church.

The unauthorized consecrations occurred on 20. November 2010 in Chengde. The explanation was also urgent because of an announcement by the Communist Regime's willingness to conduct more unauthorized Episcopal Consecrations. The complete wording of the explanation was published in Osservatore Romano on the 11th of June 2011 some days before, after which the Chinese Secretary of the Congregation for the Evangelization of Peoples, Msgr Xaver Hon had taken an adverse position to the Holy See and Peking intermixing authority in the Episcopal Consecrations. He encouraged Chinese Bishops to have no fear, that the government proposals will receive a firm rebuttal.

The Papal Adviser clearly explained that the unauthorized Consecration of Bishops, that is to say without the approval of the Pope, represents a profound violation of the Church's Law. It is a "punishable act against Catholic teaching". The Adviser cited as well the Second Vatican Council as well as other Documents, in which he recalled that also concern the question of the Eastern Churches.

The Declaration is in any case very clear that the punishable act will be directed against the consecrated Bishops as well as those who offered the consecration. All those named are fall under the condemnation latae sententiae. This doesn't impose an expressed condemnation at the end of a canonical procedure. The excommunication itself will have happened automatically according to itself.

It is expressly mentioned in the declaration that Church Law (Canon 1324, Paragraph 3) "ameliorates" the circumstances if known (excepting for compulsion, ignorance …). Should such be given, the excommunication will not be automatic. This part of the declaration falls above all upon the Bishops standing in unity with Rome, who have participated in the unauthorized consecrations. Accordingly there were reports surrounding the event, that at least some of them were ordered by the State Police or abducted to force their participation. For that reason the Holy See is allowing some room to allow those participating to make the "necessary penance" and take steps, to deport this outrage from the world.

Each, who falls under Excommunication, "must" refrain from the following things:

1) celebrating Holy Mass or concelebrating or participating in any other liturgical event;

2) giving or receiving the Sacraments and Sacramentals;

3) participating in various functions and tasks of Church direction.

In other words: the bishop who received the unauthorized consecration and the Bishops, who participated in the unauthorized consecration or were present, may neither celebrate Holy Mass, nor dispense Sacraments or receive the same. Additionally the Bishops concerned may not participate in the direction or administration Episcopal office in any way.

Should they do any of the following things, they commit a Sacrilege.

The declaration does not hesitate to make clear that the strictures and punishments are "medicine", part of a healing process of sorrow, penance and return and with that to encourage healing and reconciliation.